The $10 screwdriver: a cautionary management tale

I've told this story to friends several times. It's a simple story, but the lessons are complex and it touches on many different areas. See what you think.

I was a software developer for a large organization working on network-related software. For various reasons I won't go into, we had to frequently change network cards in our test computers and re-install drivers. My bosses' boss put a rule in place that we had to use IT Support to change cards and re-install drivers - we weren't to change the cards ourselves. No other team had a similar rule and there had been no incidents or injuries. Despite asking many times, he wouldn't explain why he put the rule in place.

At first, IT Support was OK with it. But as time wore on, we wanted to change cards twice a day or more. IT Support had a lot of demands on their time and got irritated with the constant requests. They wanted to know why we couldn't do it ourselves. One of the IT guys burned us a CD with the drivers on it and told us to get our own screwdrivers and change the cards ourselves. They started to de-prioritize our help requests because, quite rightly, they had other things to do and we could swap the cards ourselves. It got to the stage where we had to wait over two hours for someone to come, unscrew two screws, swap the card, and screw the two screws back in.

We were very sympathetic to IT Support, but the situation was becoming intolerable. My software development team complained to our management about the whole thing. My bosses' boss still wouldn't budge and insisted we call IT Support to change cards, he wouldn't explain why and he wouldn't escalate the de-prioritization of tickets.

I got so fed up with the whole thing, I went out one lunchtime and bought a £7 ($10) screwdriver. It was a very nice screwdriver, it had multiple interchangeable heads, a ratchet action, and it was red. I gave it to the team. We used the screwdriver and stopped calling IT Support - much to their relief. 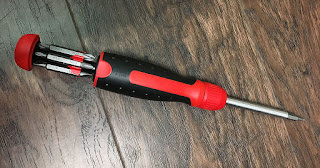 (This isn't the actual screwdriver I bought, but it looks a lot like it. Image source: Wikimedia Commons, Author: Klara Krieg, License: Creative Commons.)

I then made a big mistake. I put in an expense claim for the screwdriver.

Of course, the team all knew what was going on and there was incredulity about the company's behavior. The team lost a lot of respect for our leadership. The screwdriver was considered a holy relic to be treasured and kept safe.

Subsequent to these events, I left and got another job. In my new job, I ended up buying thousands of pounds worth of equipment with no one blinking an eye (my new boss told me not to bother him with pre-approval for anything under £1,000). All the other technical people in the group left not long after me. A competitor had been making headway in the market while I was there and really started to break through by the time I left. To respond to the competitive challenge, new management came in to make the company more dynamic and they replaced my entire management chain.

Here's what I learned from all this. I should have eaten the cost of the screwdriver and avoided a conflict with my management chain, at the same time, I should have been looking for another job. The issue was a mismatch of goals: I wanted to build good things quickly but my management team didn't want to rock the boat. Ultimately, you can't bridge a gap this big. Buying the screwdriver was a subversion of the system and not a good thing to do unless there was a payoff, which there wasn't.

I promised myself I would never behave like the management I experienced, and I never have. With my teams now, I'm careful to explain the why behind rules; it feels more respectful and brings people on side more. I listen to people and I've reversed course if they can make a good case. I've told people to be wise about expenses, to minimize what they spend, but when something needs to be bought, they need to buy it.

What do you think?

Posted by Mike Woodward at 1:00 PM