How to (maybe) win at dice

Does God play dice with the universe?

Imagine I gave you an ordinary die, not special in any way, and I asked you to throw the die and record your results (how many 1s, how many 2s, etc.). What would you expect the results to be? Do you think you could win by choosing some numbers rather than others? Are you sure? 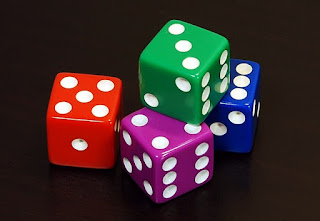 Let's say you thew the die 12,000 times, you might expect a probability distribution something like this. This is a uniform distribution where all results are equally likely. 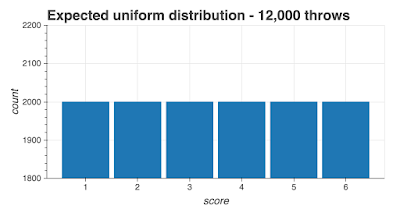 You know you'll never get an absolutely perfect distribution, so in reality, your results might look something like this for 12,000 throws. 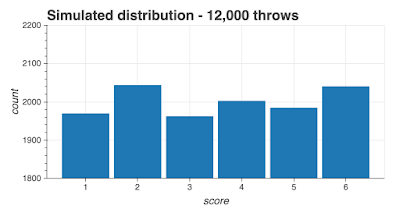 The deviations from the expected values are random noise that we can quantify. Further, we know that by adding more dice throws, random noise gets less and less and we approach the ideal uniform distribution more closely. 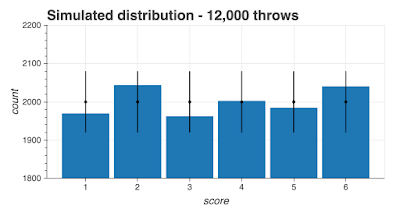 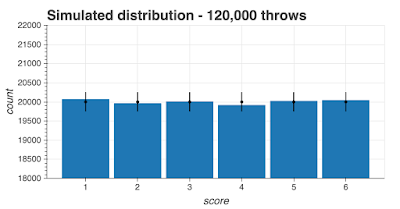 What happened in reality - not what you expect

My results are simulations, but what happens when you throw dice thousands of times in the real world?

There's a short history of probability theorists and statisticians throwing dice and recording the results.

Weldon's data set is widely used to illustrate statistical concepts, especially after Pearson used it to explain his \(\chi^2\) technique in 1900.

Despite the excitement you see at the craps tables in Las Vegas, throwing dice thousands of times is dull and is, therefore, an ideal job for a computer. In 2009, Zachariah Labby created apparatus for throwing dice and recording the scores using a camera and image processing. You can read more about his apparatus and experimental setup here. He 'threw' 12 dice 26,306 times and his machine recorded the results.

In the chart below, the blue bars are his results, the black circle is the expected result, and the black line is the 95% confidence interval. I've taken the results from all 12 dice, so my throw count is \(12 \times 26,306\). 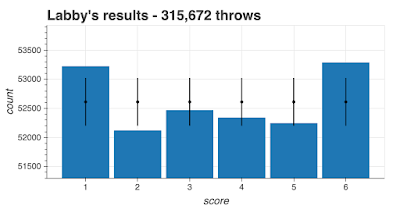 This doesn't look like a uniform distribution. To state the obvious, 1 and 6 occurred more frequently than theory would suggest - the deviation from the uniform distribution is statistically significant. The dice he used were not special dice, they were off-the-shelf standard unbiased dice. What's going on?

Take a very close look at a normal die, the type pictured at the start of this post which is the kind of die you buy in shops.

By convention, opposite faces on dice sum to 7, so 1 is opposite 6, 3 is opposite to 4, and so on. Now look very closely again at the picture at the start of the post. Look at the dots on the face of the dice. Notice how they're indented. Each hole is the same size, but obviously, the number of holes on each face is different. Let's think of this in terms of weight. Imagine we could weigh each face of the dice. Let's pair up the faces, each side is paired with the face opposite it. Now let's weigh the faces and compare them. 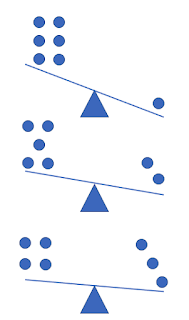 The greatest imbalance in weights is the 1-6 combination. This imbalance is what's causing the bias.

Obviously, the bias is small, but if you roll the die enough times, even a small bias becomes obvious.

So we know for dice bought in shops that 1 and 6 are ever so slightly more likely to occur than theory suggests. Now you know this, why aren't you booking your flight to Las Vegas? You could spend a week at the craps tables and make a little money.

Let's look at the dice they use in Vegas. 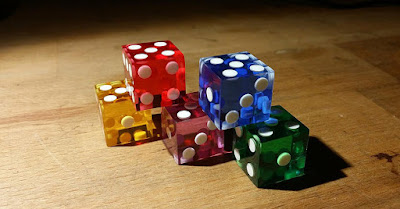 Notice that the dots are not indented. They're filled with colored material that's the same density as the rest of the dice. In other words, there's no imbalance, Vegas dice will give a uniform distribution, and 1 and 6 will occur as often as 2, 3, 4, or 5. You're going to have to keep punching the clock.

Things are going to get mathematical from here on in. There won't be any new stories about dice or Vegas.

How did I get the expected count and error bars for each dice score? Let's say I threw the dice \(x\) times, it seems obvious we would get an expected count of \(\frac{x}{6}\) for each score, but why? What about the standard error?

Academics live or die by publications and by citations of their publications. Labby's work has rightly been widely cited on the internet. I keep hoping that some academic will be inspired by Labby and use modern robotic technology and image recognition to do huge (million-plus) classical experiments, like tossing coins or selecting balls from an urn. It seems like an easy win to be widely cited!