Battle leadership: some lessons for managers from World War I

Books on military leadership and management have been popular in the business world for a long time. "The art of war" is a best-seller 2,500 or so years after it was written and books authored by US military leaders have consistently sold well. To state the obvious, business is not war and companies are not armies, but given this, there are still lessons military leaders have to offer; the art is picking out what applies and what doesn't.

I recently stumbled across an old military leadership book dating back to World War I. Although the world has changed greatly since then, I found some of the ideas and discussions still relevant to today's business environments. Read on to find out more. 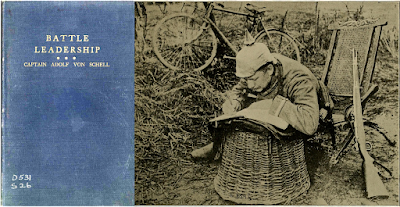 (The book and a German soldier in World War I. Internet Archive Book Images, No restrictions, via Wikimedia Commons.)

The book and its history

The book is "Battlefield Leadership" and was first published in 1933 in the US. The author was Adolph von Schell (1893-1967), an officer in the German army in the First World War. He led troops in the European theater during the war, winning a number of medals and commendations [https://de.wikipedia.org/wiki/Adolf_von_Schell_(General,_1893)]. After the war, he trained at the US Army's Fort Benning where he was asked to speak about his experiences leading men in combat. His talks became the book, "Battlefield Leadership" which was published in English (strangely, the German translation was published much later).

The book is an odd mix of psychology, management, and battlefield stories, not all of which are relevant to the world of business. Plainly, warfare has moved on a lot since the First World War; tactics and strategy have changed greatly, but what hasn't changed are some of the core ideas of people management, as we shall see.

Schell states that in "modern" warfare, people fight in small groups, often as individuals, against an enemy they can't see. Therefore, commanders need to know how individuals are likely to react and how they can be influenced. A unit may well have soldiers from diverse backgrounds, so the commander has to have an appreciation of their culture. Similar lessons apply further up the command hierarchy; a general must know his subordinates and how to motivate them: "Furthermore, each one reacts differently at different times, and must be handled each time according to his particular reaction", Schell gives a crude example in the book, but despite the crudity, the underlying lesson is clear.

He has some valid points to make about the need for individuals to exert some measure of control over their situation. Soldiers that wait under hostile fire have time to think and become stressed because they can't change their situation; they lie waiting for bullets to hit them. Soldiers on patrol are more at risk, but their destiny is in their hands so they're willing to go out and take control of their situation. He talks about soldiers under fire moving their position to be more secure: "it makes no difference whether or not the security is real; it is simply a question of feeling that it is".

Men under fire need some measure of security. Schell gives examples of a commander who ordered his men to have haircuts while their position was being shelled. The point isn't the haircuts, the point is the sense of normality the haircutting process gave. Even though men died during the shelling, morale stayed high because the team had a sense of security.

Experience matters in many ways

In several places throughout the book, Schell gives examples of how experienced troops behave compared to troops that had not seen combat. He gives an example from the early days of the war when his company of inexperienced troops first crossed into Belgium; despite meeting no resistance, they shot at shadows in the forest and spent a restless first night afraid of an attack that never came. By contrast, later in the war, he led battle-hardened troops in Russia. Despite similar circumstances, they didn't shoot at shadows in the forest, instead, they posted two sentries and the rest of the company slept soundly, even though they were in enemy territory.

As a practical matter, he recommends mixing inexperienced and battle-hardened troops. He comments that even on a day-to-day basis, and away from battle, seasoned troops coach the inexperienced troops on what to do and how to behave. He similarly cautions against changing commanders, a commander has to get to know his troops, and wartime is not an ideal time to do it:
"If we give these inexperienced troops a backbone of experienced soldiers and experienced commanders their efficiency will be tremendously increased and they will be spared heavy losses."

I'm going to quote two of his lessons verbatim:
"(1) At the commencement of war, soldiers of all grades are subject to a terrific nervous strain. Dangers are seen on every hand. Imagination runs riot. Therefore, teach your soldiers in peace what they may expect in war, for an event foreseen and prepared for will have little if any harmful effect.
(2) As leaders be careful both in sending and in receiving reports. At the commencement of a war, ninety percent of all reports are false or exaggerated."

Change the word "war" for "competitive situation" and you get something obviously relevant for business.

Orders based on incomplete information

Quite correctly, Schell points out that leaders have to make decisions based on partial information, and on information which is doubtful at best:
"In open warfare a leader will have to give his orders without having complete information. At times only his own will is clear. If he waits for complete information before acting he will never make a decision."

This is my favorite part of the book. It recalls an action where the Germans and Russians faced off against one another in Russian territory. The German commander received continual updates on the Russians' position and he changed his tactics in response to the new information. His commands to his men were clear, simple, and to the point. Here's his summary:
"This example shows clearly that difficult situations can be solved only by simple decisions and simple orders. The more difficult the situation the less time there will be to issue a long order, and the less time your men will have to understand it. Moreover, the men will be high-strung and tense. Only the simplest order can be executed under such conditions."

In the same action, the Germans were facing a larger Russian opponent. They needed to watch a Russian position but didn't have the troops to. A corporal solved the problem. There was a large herd of cows in a nearby village, so the Germans moved the cows to a field between them and the Russians. Whenever the Russians tried to advance across the field, they disturbed the cows, so alerting the Germans. 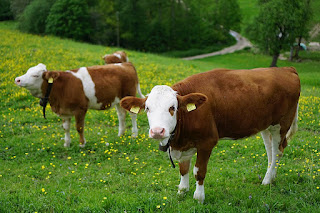 Eventually, of course, superior numbers prevailed and the Germans had to retreat. The commander knew where to retreat to, but didn't have a map. Waiting for a map would have meant defeat, so based only on a rough knowledge of geography, they retreated, eventually joining up with other companies. The commander had to take a risk by retreating into unknown territory, but not retreating would have been more dangerous.

Notably, Schell discusses 'mission tactics' which are better known as 'mission orders' today. The idea is simple, commanders will achieve more if they can exert some control, so orders should focus on the mission and not on how it's to be executed. There's a sound operational reason too: "This is done because the commander on the ground is the only one who can correctly judge existing conditions and take the proper action if a change occurs in the situation". The relations to modern business are obvious: give senior people goals to achieve and give them the freedom to do it in whatever way they can.

I found little nuggets of wisdom throughout the book, here are some I want to share:

This book was first published in 1933 based on Schell's experience in war over the period 1915-1918.  There's more in this short book than I've seen in some much longer and more recent management books, and frankly, there's more of substance in this book than some highly-paid consultants I've worked with. Is this the only management book you should read? Absolutely not. Does it contain some interesting insights? Yes it does.

The book was published in 1933 and the author died in 1967. It's not clear to me what the copyright situation is. You can buy a copy cheaply on Amazon, but you can also find free PDFs available online from legitimate sources.