Handwriting is the new typing

This post is all about ball pens within a reasonable price range, fountain pens are just too advanced for me and I'm cheap.

What makes a good handwriting experience?

Early on, I discovered that the pen and ink you use make a big difference, not only to the quality of the result (legible handwriting) but also to the tactile pleasure of writing. I found the smoothness of the pen moving across the paper makes a difference; some pens just glide across the page and are wonderful to use, while others skip and drag like taking a pet to the vet. Some otherwise great pens gave smooth and thick lines that bled through to the other side of the paper, while other pens gave precise narrowness at the expense of scratchiness. After some experimentation, I concluded that the thrill of the writing experience is governed by two things: the pen barrel and the refill.

For the pen barrel, its weight and the feel of the pen in my hand were the most important factors. As we'll see later, the weight of pens varies by almost an order of magnitude and I had very different writing experiences at either end of the scale. After many trials, I found I like heavier pens. The feel of the pen is harder to describe; I like pens with some form of special 'grip' or finger guide, but my favorite pen is all metal and smooth (I'm obviously not consistent). In the picture below, only the Pilot G-2 (2nd from top) and the Zebra Sarasa (3rd from top) have guides. 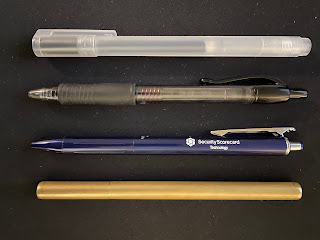 Refills for ball pens are of two general types, ballpoint ink, and gel ink. Ballpoint ink is thicker and heavier but lasts longer, while gel ink is smoother on the paper but doesn't last as long. For a better writing experience, the choice for me is clear: gel ink. As a bonus, gel ink pens come in a rainbow of colors.

Gel ink refills (and pen refills in general) are like dogs, they come in a range of different sizes. There are international standards, but even within standards, the variation is great. The image below shows some refills which are all about the same length (110mm) and all about the same width (6mm). As you've probably guessed, some of these refills fit some pens and not others. Is there any way of knowing what size refill a pen will take? No. You just have to guess or buy the same refill that went into your pen.

The size of the ball on the refill is hugely important. Typically, gel refills have the following ball sizes:

The thicker the ball, the better the pen glides across the paper, but the cost is thicker lines which may lead to the ink bleeding through to the other side of the paper. Thinner balls give more writing precision but can feel a bit scratchy and you have to be careful about the angle you use to write.

The other obvious factor to consider is the manufacturer. I tried M&G, Zebra, Muji, and Pilot. I found I liked the Muji 0.38mm refill for precision at the cost of a little scratchiness. Sadly, all of the Muji refills froze partway through and I couldn't revive them (see below). I ended up using the Zebra and M&J refills but I'll probably move to Zebra permanently soon (see below for why).

A few times, I've had the experience where a new refill stops working partway through. There are two closely related symptoms: it just stops writing altogether or it only writes in one direction. I've tried cleaning the type with alcohol, putting the refill in hot water, and removing the nib and cleaning the insides with alcohol. Nothing worked. On the internet, I've heard stories of people using heat guns or using naked flames to heat the refill nib, however, I've also heard stories of refills exploding when people do this kind of thing, so perhaps it's not a good idea.

It's annoying, but typically refills cost around $1, so I just buy another refill and move on.

I thought I liked heavier pens, but I wanted to be sure, and what better way for a nerd to be sure than weigh his pens? I weighed all my pens without their refills to avoid differences due to the refills themselves. Here are the results.

There's a 7x weight difference between the Muji and the AliExpress pens. I knew the Muji was light, but I didn't think it was that light.

Interchangeable refills - or not

My favorite pen was my $2 solid brass AliExpress pen which takes M&G refills. M&G is a Chinese brand and unfortunately, it's recently become harder to get their refills in the US. I wondered if I could use the Zebra refills in my AliExpress pen. Sadly not. The M&G refills are slightly narrower than the Muji refill and have a slightly different end. These differences are small, less than 1mm, but pens are precision instruments, and when something won't fit, something won't fit. I couldn't find a non-M&G refill that fit, so when I finish my last M&G refill, my $2 brass pen becomes a $2 brass stick.

But all is not lost. I actually bought two seemingly identical brass pens from AliExpress a few weeks apart. It turns out, the second one is ever so slightly different. Different enough that the Zebra refill fits.

Before the pandemic, I mislaid my $2 (actually $1.99) AliExpress brass pen at work. The office manager asked me what I was looking for and I told her "My one ninety-nine pen". She dropped everything to help me find it, which we did after a thorough search. Once we'd found it, she said it didn't look expensive and I said it was $1.99 not $199. She gave me a look that said "you're an idiot" and of course, she was right.

Posted by Mike Woodward at 11:43 AM No comments: