In German, a world city (or "weltstadt") is a large, sophisticated, cosmopolitan city. There are only a handful of them and the list includes New York and London. Although there are obvious differences between these two cities, there are many, many similarities; no wonder they're sister or twin cities.

I was reading a National Geographic article about geographic misconceptions and it set me thinking about some of the less obvious, but profound differences between London and New York.

Let's dive into them.

If London was in North America...

Let's line up some of the major North American cities in terms of miles north or south of New York. I'm going to ignore miles east or west and just focus on north and south. Here's the line on the left.

As you can see, Quebec City is 421 miles north of New York and Charlotte is 379 miles south.

On this line, where do you think London would appear? How many miles north or south of New York is London? Take a guess before scrolling down and peeking.

745 miles is a long way north and it has some consequences. 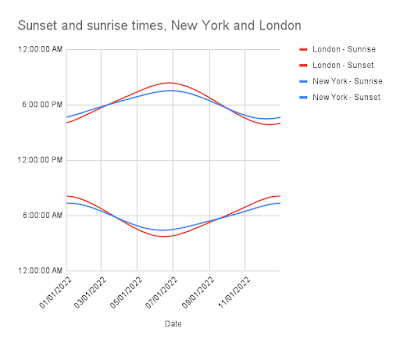 To show the differences a bit more starkly, let's take sunrise and sunset on solstice days:

That's a big difference. In London in the summer, you can party in daylight until 9pm, by which time in New York, it's gone dark. Conversely, in London in winter, the city is dark by 4pm, while New Yorkers can still enjoy the winter sunshine as they do their Christmas shopping.

On the face of it, it would seem like it's better to spend your summers in London and your winters in New York. If London is so far north of New York, surely New York winters must be better?

I've plotted the average monthly high and low temperatures for London and New York. London has cooler summers but warmer winters. Is this what you expected? 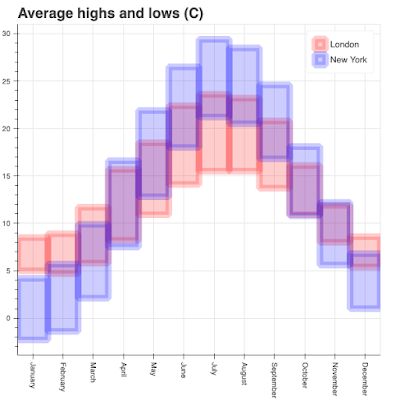 London's climate, and in fact much of Europe's, is driven by the Gulf Stream. This keeps the UK much warmer than you would expect from its latitude. Of course, the fact the UK is a small island surrounded by lots of water helps moderate the climate too.

The moderate London climate is probably the main reason why people think London and New York are much closer on the north-south axis than they really are.

Climate as an engine of culture

On the face of it, you would think cities with different climates would have different cultures, but New York and London show that's not always the case. These two cities are hundreds of miles apart (north/south) and have noticeably different climates, but they're culturally similar, and obviously, they're both 'world cities'. Perhaps the best we can say about climate is that it drives some features of city life but not the most fundamental ones.

Posted by Mike Woodward at 8:07 AM No comments: