I've just read a book that's both inspiring from a business perspective and at the same time, deeply worrying from a society perspective. It's about public relations and propaganda. The kicker is that the book was published in 1928. 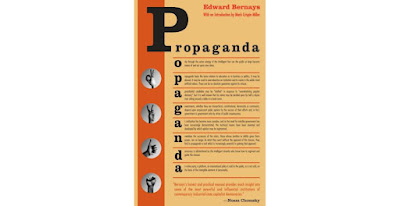 The author was Edward Bernays who's generally regarded as the father of public relations and was and is a controversial figure. He was born in Vienna in 1891 and was Sigmund Freud's nephew - another example of the huge influence of the Frued family. In the 1890's, the family moved to the US, where he lived for the rest of his long life, he died in 1995 at the age of 103. During the first world war, he worked for a US government propaganda unit where he learned most of the tools of his trade. In 1929, he successfully promoted smoking to women, and in the 1950's, he worked with the United Fruit Company and the CIA to topple the democratically elected government of Nicaragua.

His 1928 book, Propaganda, outlines the theory behind public relations and gives details of how successful PR campaigns work. Although Bernays draws a distinction between propaganda and public relations, the line is very, very thing (if it's there at all). The book provides a psychological and sociological background for how PR works and even suggests that it's morally necessary for society to function. He then dives into the use of PR for commerce, politics, and education etc., providing examples of successful campaigns and how they were orchestrated. He very clearly explains, in terms of psychology and sociology, why some influence approaches work and some don't.  What's striking is how politicians and companies are still using these techniques today; it helps explain why some of our media are the way they are.

The book isn't an easy read. In my view, it's repetitive, overwritten, and lacks detail in many places. Bernays' moral justification for propaganda feels paper thin. But despite this, I recommend reading it, or at least reading a more recent book on propaganda, it's eye-opening.

I'm not going to review the book in detail, instead, I'm going to give you some key quotes so you get a sense of what it says. You can decide for yourself if it's worth a trip to the library (or a click to download).

"In theory, every citizen makes up his mind on public questions and matters of private conduct. In practice, if all men had to study for themselves the abstruse economic, political, and ethical data involved in every question, they would find it impossible to come to a conclusion about anything."

In other words, people need PR to understand the world and form opinions about things.

"It has been found possible so to mold the mind of the masses that they will throw their newly gained strength in the desired direction. In the present structure of society, this practice is inevitable. Whatever of social importance is done to-day, whether in politics, finance, manufacture, agriculture, charity, education, or other fields, must be done with the help of propaganda. Propaganda is the executive arm of the invisible government."

Bernays talks a lot about the invisible government, these are the people who shape the thoughts and opinions of the masses.

"The mechanism by which ideas are disseminated on a large scale is propaganda, in the broad sense of an organized effort to spread a particular belief or doctrine."

"Small groups of persons can, and do, make the rest of us think what they please about a given subject."

"There are invisible rulers who control the destinies of millions. It is not generally realized to what extent the words and actions of our most influential public men are dictated by shrewd persons operating behind the scenes."

"The invisible government tends to be concentrated in the hands of the few because of the expense of manipulating the social machinery which controls the opinions and habits of the masses."

"Trotter and Le Bon concluded that the group mind does not think in the strict sense of the word. In place of thoughts it has impulses, habits and emotions. In making up its mind its first impulse is usually to follow the example of a trusted leader."

"The newer salesmanship, understanding the group structure of society and the principles of mass psychology, would first ask: "Who is it that influences the eating habits of the public?" The answer, obviously, is: "The physicians." The new salesman will then suggest to physicians to say publicly that it is wholesome to eat bacon. He knows as a mathematical certainty, that large numbers of persons will follow the advice of their doctors, because he understands the psychological relation of dependence of men upon their physicians."

"This point is most important in successful propaganda work. The leaders who lend their authority to any propaganda campaign will do so only if it can be made to touch their own interests. There must be a disinterested aspect of the propagandist's activities. In other words, it is one of the functions of the public relations counsel to discover at what points his client's interests coincide with those of other individuals or groups."

"Just as the production manager must be familiar with every element and detail concerning the materials with which he is working, so the man in charge of a firm's public relations must be familiar with the structure, the prejudices, and the whims of the general public, and must handle his problems with the utmost care. The public has its own standards and demands and habits. You may modify them, but you dare not run counter to them."

"The public is not an amorphous mass which can be molded at will, or dictated to. Both business and the public have their own personalities which must somehow be brought into friendly agreement."

"A sound public relations policy will not attempt to stampede the public with exaggerated claims and false pretenses, but to interpret the individual business vividly and truly through every avenue that leads to public opinion"

"Continuous interpretation is achieved by trying to control every approach to the public mind in such a manner that the public receives the desired impression, often without being conscious of it. High-spotting, on the other hand, vividly seizes the attention of the public and fixes it upon some detail or aspect which is typical of the entire enterprise."

"Present-day politics places emphasis on personality. An entire party, a platform, an international policy is sold to the public, or is not sold, on the basis of the intangible element of personality. A charming candidate is the alchemist's secret that can transmute a prosaic platform into the gold of votes."

"Propaganda will never die out. Intelligent men must realize that propaganda is the modern instrument by which they can fight for productive ends and help to bring order out of chaos."

I can clearly see companies pursuing Bernays' PR strategy even today and what's more, I can see why they're doing it and why they're successful. I can see the role of newspapers and magazines in shaping public preferences and I can see how organizations are using social media in the same way. The same goes for politics.

It's nice to be idealistic about the future, but reading Bernays' book, I get the feeling people have been trying to manipulate me my entire life and that it's not going to stop.

Posted by Mike Woodward at 7:35 AM No comments: