Recycling waste in the garden and on the internet

My blog is supposed to be about technical and management issues, but today I'm going to write about composting. There are obvious 'humorous' comparisons with the technical world, most obviously about recycling ideas and rotting content, but beyond the obvious, there are lessons about material on the internet.

How it works for me

I have what's called a tumbling composter. It has two chambers. The idea is you fill one chamber with material to compost, and while that's decomposing, you fill the other chamber. Complete composting takes a few weeks in summertime, a little longer in spring and fall, and stops almost completely in winter. You're supposed to rotate the drum every few days to aerate the compost. Each chamber gives about a wheelbarrow load of compost and you get several loads per chamber per year. 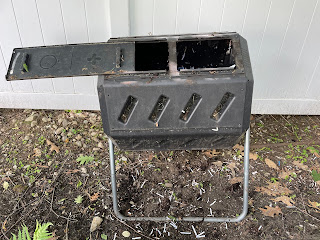 Garden waste: a waste of time

The first lesson I learned is that it's hard or impossible to compost garden waste. In principle, garden waste is ideal, but in practice, there's so much of it that it overwhelms the compost mix and stops the decomposition process. You need a mix of materials for successful composting and garden waste is just too much of one thing.

Of course, the first thing I tried to compost was leaves and I learned they break down extremely slowly. A friend suggested I shred them first, but even then, the rotting process is slow. Leaves just aren't good for compost and you should dispose of them separately.

Sticks and branches decompose slowly too. If you're going to put woody material into the compost heap, you need to chop it up into small pieces first. Even then, they don't tend to rot completely.

If you look at the Amazon reviews of composting bins, you'll find multiple reviews from people who've stuffed their bins full of grass clippings, leaves, or other garden waste and they're complaining that it doesn't compost. They're publicly blaming the product instead of figuring out why they made a mistake. (First internet lesson: reviews and comments from people on the internet can be wrong and/or misinformed. The customer isn't always right, especially when they're writing reviews.) To make composters work, you have to mix your content.

Greens and browns: the golden ratio

Almost all composting websites talk about greens and browns and the correct ratio. Here's what they consider browns (the list varies from source to source):

Here's what they consider greens (again the list varies):

The correct ratio is something like 3 brown to 1 green, but the ratio varies from site to site and I've even seen it stated as 1 to 1. I try to stick roughly to a 3 brown to 1 green ratio, but it's never exact.

Initially, I found my composter gave balls or clumps of material. This is a well-known problem with tumbling composters like mine and is caused by the mixture being too wet and/or an insufficient amount of brown material. If your mix is clumping into balls, add more shredded paper, but mix it in thoroughly.

I've visited lots of sites to find details of the mix and what I should do. Strikingly, the writers all made similar statements about greens and browns and the ratio, but they never backed their assertions with science and they never linked to other resources. After a while, I realized I was seeing the same content over and over again, and even though it wasn't an exact copy, it was so close it might as well have been. Many of the sites didn't read that well and contained a lot of repetition, which leads me to think they were being SEO'd to death, it also explains the lack of links; they want to keep people on the site. Overall, I visited a lot of low-quality sites that didn't say very much. There are a couple of internet lessons here:

Am I guilty of the same thing? I hope not. I'm trying to say something new, but then this is a hobby site and I'm not making any money out of it.

The thing that works wonders for me is kitchen waste coupled with shredded paper; this gives me the best compost and it decays quickly. There are some rules though.

I used some kitchen paper to mop up blood from meat and threw the kitchen paper into the composter. A few days later, I saw maggots eating the blood-stained paper; but only the spots where the blood was. Gross, but fascinating. Maggots usually indicate you have animal products in your compost.

The composting process is mainly bacterial and the bacteria has to come from somewhere. To get started, I threw in several handfuls of soil from different parts of my garden. When I empty my composter, I don't remove all the compost, I leave some in so the decomposition process for the next load can get started.

I also added worms to my bins too. I hope they like the paper and cardboard I'm putting in. I don't want to be cruel, even to worms.

Once food and paper rot, it takes up a lot less space. I've found that a nearly full compost chamber has a lot more space after a week or two when the contents have decayed a bit. The lesson here is that even when a chamber looks full, if you leave it a while, you can fit more waste in.

I'd heard blood-curdling stories of wasps setting up home inside rotating compost bins. In practice, that didn't happen to me, maybe because I rotated the bins every few days during the warmer weather. I can see if you left the bins alone for a week or so, it might be an attractive place for wasps to nest, after all, it's warm and dry. The moral is: don't neglect your compost!

Because I don't compost any animal products, I've never had a rat or raccoon problem.

Winter is coming - even for the compost heap

I found that decomposition stops in winter. Once my chambers were full up in late November, that was it until March. The advice I read was not to rotate the drum once the weather gets cold, the idea is that rotating the drum causes the compost to lose heat; if you keep the drum still, decomposition can go on a bit longer. Of course, once winter really set in, the chamber contents froze solid and after a while, the sliding chamber cover froze in place so I couldn't view the chamber contents anyway.

To keep my recycling going during winter, I filled up cardboard boxes with food and paper waste and waited for the spring to restart composting; of course, I composted the cardboard box too. Because I didn't throw out meat products, I didn't have any problems with animals.

I bought the composter to get rid of garden waste and found out that it wasn't good for that. What I found in practice was it was great for disposing of kitchen waste and paper. Using my composter, I've managed to reduce the amount of waste I throw out by several trash bags per year. Of course, I also get several wheelbarrow loads of compost per year. Overall, composting is both better for the planet and better for my garden.

Sadly, I found that it wasn't just my composter that was full of recycled material, it turns out, that a lot of internet sites are too. Who knew.

Posted by Mike Woodward at 3:14 PM No comments: