Sometimes, there are events that ripple through history and have effects hundreds of years later. I'm sure you're thinking of battles, or assassinations, or elections, or something noisy or violent. But smaller and more peaceful events can have big impacts; even something as innocuous as a single dinner party can change the world. We're approaching Halloween, so I'm going to tell you how a dinner party over two hundred years ago gave us two iconic horror legends and how brilliant people can have an impact on the world that outlives them. Let's start with who was at this dinner party. 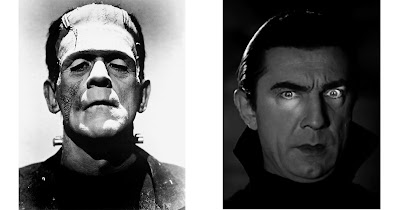 Lord Byron. 'Mad, bad, and dangerous to know.' Lord Byron is regarded as one of the leading English poets and his poetry is still widely read today. To say his life was full is something of an understatement; he was at times a theater director, poet, revolutionary, political radical, and a sexual adventurer. As we'll see, some of his behavior was quite shocking, even by modern standards. By 1816, his 'relationship' escapades made England too uncomfortable for him, so he left.

Percy Bysshe Shelley. An English romantic poet, still regarded as one of the country's finest. Shelley was a political radical and didn't follow the social codes of the day. Although his behavior was considered scandalous, it wasn't at Byron's level of hedonism. By 1816, Shelley had left his wife and was in a relationship with Mary Godwin (later, Mary Shelley).


Mary Shelley. The daughter of the early feminist and radical Mary Wollstonecraft and the political philosopher William Godwin. Despite this illustrious heritage, she received little in the way of formal education. When she was 17, she fell in love with Shelley and ran off with him to Europe. In February 1815, Mary gave birth to a baby girl (Shelley's daughter), but the child died soon after birth.

Claire Claremont. Mary Shelley's half-sister. She had a more formal education than Mary, including the ability to speak French (which she used to aid Mary and Percy Shelley's initial trip to Europe). She was pursuing an affair with Byron which was cooling by the time of the events I'm going to describe.

John Polidori. Byron's personal physician and only 20 years old during the trip and dinner party. By all accounts, Byron treated Polidori with contempt and constantly belittled him. Polidori had large gambling debts and was secretly in the pay of Byron's publisher, who gave him a £500 advance to keep notes on what went on; they were hoping for some salacious gossip. Polidori was also interested in Mary, who was not interested in him.

The volcano and its aftermath - the 'year without a summer'

In 1815, the volcano at Mount Tambora erupted. This was the largest volcanic eruption in modern times; it was heard 2,600 km away and pumped 41 cubic km of dust 43 km high into the atmosphere.

The huge amount of atmospheric dust had a dramatic impact; it reflected sunlight which resulted in global cooling. The loss of sunlight led to people calling 1816, 'the year without a summer', but it was worse than just bad summer holidays; crop failures led to famines worldwide which in turn led to political upheaval. Atmospheric dust gave spectacular sunsets which were captured by artists at the time.

Europe in the early part of the 19th century had convulsed with war. Napoleon has run hugely successful military campaigns across the continent, leaving devastation behind him. In 1815, there was a final battle for supremacy, with Napoleon on one side and a 'coalition of the willing' on the other - this was the famous battle of Waterloo. Napoleon was finally defeated, but at a huge cost. The people and infrastructure of continental Europe suffered the ravages of war.

Europe needed to recover, and that takes some good fortune and time. Unfortunately, the after-effects of the volcano led to crop failures and famines just at the time when good conditions were needed.

Culturally, there was a strong feeling of the end of days; war, crop failures, wild weather, and outstanding sunsets. These were not normal times.

Our five adventurers had decided on taking a European vacation together. They'd traveled across Europe and met up in Lake Geneva, Switzerland, where they rented adjoining properties. The original intent was some pleasurable diversions like boating and sightseeing, but the miserable conditions meant they had to stay inside. Instead of warm, bright, summer evenings, they had instead conditions more like winter.

Tensions were high between the five of them. Claire was still pursuing Byron, who wasn't interested except when he was. Byron was busy demeaning and belittling Polidori. Polidori was chasing Mary who wasn't interested in being chased. To add to the fun, Shelley was trying hard to impress Byron. Of course, a general dread hung heavy in the air: everyone knew about war, crop failures, and political upheaval.

As you might expect with such a group of people, the conversation was wide-ranging, varying from folklore to politics to science. Shelley and Byron were prone to flights of fancy in their discussions; once, when Byron was reading a ghost story, Shelley imagined a woman with eyes in place of nipples and ran screaming from the room. Polidori was more scientific, and with him they spoke of Galvini's experiments on frog's legs, making them kick by applying electricity; had Galvani discovered the life force? Of course, there were also discussions of the latest political ideas and the concept of free will. All in all, a heady atmosphere.

One night, after a reading of ghost stories, they decided on a contest; who could write the best horror story? Of course, the expectation was that Byron and Shelley would win, but that's not what happened. The following morning, Byron had a so-so effort, John Polidori had something better, and the best of all came from the least experienced writer; Mary Shelley.

The birth of Frankenstein

The ideas coalesced in Mary's head: free will, animating life force, the desire for love, ghost stories, wild human behavior, and the gothic feel of central Europe. She created a scientist, Frankenstein, who ignores society's moral code to play God and create life itself. The monster he created was never named in the book, but it's telling that our sympathies are with the poor, mistreated person; a monster in appearance, but an articulate feeling being.  Shelley tells a story of the creator's neglect of his creation and its effect on the monster, of how the monster has to educate himself, and how he later comes looking for his maker to create a partner for him; the monster is looking for love. We might even say the monster wants life, liberty, and the pursuit of happiness.

The group declared Mary the winner and encouraged her to publish her story, which she did after the Shelleys return to England.

Mary Shelley published the novel anonymously; it became a best-seller but received mixed reviews from literary critics. Once she was known as the author, some reviewers speculated that it might have been written by Percy Shelley rather than Mary. This seems like typical nineteenth-century sexism at first, but bear in mind that Percy Shelley was a well-known writer at the time and Mary was not. It does seem likely that she had some help with editing and maybe with writing suggestions, and why not when she had world-class writing talent on tap? The consensus today is that she was indeed the author.

The birth of vampires

Polidori's story was altogether different. He imagined a vampire, but not the vampire creatures of old, which were ugly, inhuman creatures. His vampire was a man, but a man who was physically attractive, deeply manipulative, and preyed on women - and a lord as well. His role model was obviously Byron himself ('mad, bad, and dangerous to know'). This story, 'Vampyre', is credited with creating the elements of the modern vampire legend and was one of the inspirations for Bram Stoker's 'Dracula' 70 years later.

'Vampyre' was published without Polidori's permission and was initially credited to Byron, though both Byron and Polidori later claimed it was Polidori's work.

What happened after that fateful evening?

Claire Claremont gave birth to Byron's daughter, but at the time as a single mother, she needed Byron to acknowledge and protect her child. Byron did acknowledge the child as his, and took their daughter into his 'care', he had Clare hand the baby over to him. He gave his daughter into the care of nuns in Italy and ignored the child for the rest of her life. Byron didn't see her again and he forbade Claire from doing so too. Their child died in Italy at the age of 5. Claire later said of Byron that he gave her a few minutes of pleasure, but a lifetime of trouble.

Byron never returned to England, he moved around Europe in search of entertainment and engagement, eventually fighting in the Greek war of independence (from the Ottoman empire). He died at age 36 from sepsis while preparing to fight for Greece.

(As an aside, Byron already had a daughter from his wife (he was still married to her during the events of 1816) - whom he also ignored. His wife wanted nothing to do with Byron's wild extravagant ways and educated their daughter in science and mathematics.  Their daughter's name was Ada Lovelace, of computing fame.)

A little later after the dinner part, Byron fired Polidori who returned to London. Polidori didn't enjoy the success he thought he deserved and it all become too much for him. At the age of 25, he committed suicide by drinking cyanide.

Shelley continued writing poetry. In December 1816, the body of Shelley's wife was discovered floating in the Serpentine in London. Now free to marry, he married Mary just a few weeks later. At the age of 29, he went sailing on the Gulf of La Spezia, Italy and died during a storm.

After Percy Shelley's death, Mary Shelley became a professional writer to support herself and her son.  Notably, she wrote more horror fiction, including The Last Man, the first dystopian science fiction novel. She died of a brain tumor at age 53.

Of course, vampires and Frankenstein's monster live on to this day. There have been numerous books, plays, comics, TV series, and movies featuring one or both of them. In a few days' time, children impersonating them will knock on my door, I'll give them candy, and I'll think of how it all started in Lake Geneva over two hundred years ago.