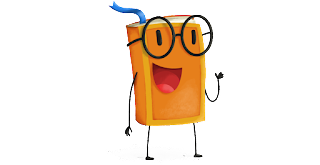 What are we trying to achieve?

In a typical A/B test, we're trying to find out if a change has a (positive) effect. For example, does changing the page layout increase the clickthrough rate? Despite what you've been told, we can't answer these types of questions with absolute certainty: the best we can do is provide a probable answer.  We use statistical best practices to map a probability to a pass/fail answer.

In this blog post, I'm going to lay out some fundamentals to help you understand the process a statistician follows to translate a probabilistic result into a pass/fail result.

This kind of test is called a null hypothesis test. The null hypothesis here is that there is no difference, the alternate hypothesis is that there is a difference. We can write this as:
\[H_0: c_T  - c_C = 0\]
\[H_1: c_T - c_C \neq 0\]
There's something subtle here you need to know. The conversion rate we measure is an average conversion rate over many visitors, probably several thousand. Because of this, some very important mathematics kicks in, specifically something called the Central Limit Theorem. This theorem tells us our results will be normally distributed, in other words, \(c_T - c_C\) will be normally distributed, which is important as we'll see in a minute.

I've blogged about null hypothesis tests before, so I'm only going to summarize things here. We can assume there's some underlying truth: either \(H_0\) or \(H_1\) is true. We don't know which is true and we're making an educated true/false guess. This gives us two ways of being right and two ways of being wrong. I've shown this in the table below.

We can't know for certain what the truth is, but we can define limits on our uncertainty. We can also define thresholds that will enable us to make reasonable pass/fail estimates. I'll show you how this works.

Assuming the null is true

The first step is to assume the null hypothesis is true, which means \( c_T  - c_C = 0\). As I explained earlier, the quantity \(c_T - c_C\) is normally distributed (this is a probability distribution, which I've blogged about before). We can compare our actual measurement of  \( c_T  - c_C\) to the theoretical distribution and ask how likely it is that the underlying value really is zero (in other words, what's the probability of the null being true?).

Let me take a second to explain this some more. Imagine I'm trying to find out if a coin is biased. I throw it ten times and see six heads. Does this prove the coin is biased? No. It could be biased, but I don't have enough throws to say. Now imagine I've thrown the coin 100,000 times and I see 60,000 heads, does this prove bias? It's not absolutely sure, but it's highly likely the coin is biased. With statistics, we quantify this kind of analysis and set ground rules for what we consider evidence. 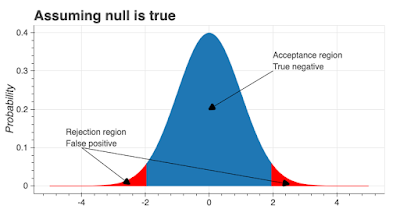 Certainty is impossible, but what we want to do is say whether a measurement means the null hypothesis is true or the alternate is. Put it another way, for a given measurement, how likely is it that the null is true or not? What's our threshold for acceptance/rejection? The standard procedure is to compare our measurement to the chart above. If our measurement falls in the blue zone on the chart we'll consider it means the null hypothesis is true. Anything that falls in the red zone, we'll consider the alternate is true. But we might be wrong - we can never have certainty. The size of the red area gives us the limits on our certainty. By convention, the red zone is 5% of the probability.

The standard limits we use are that we have to be in the 95% probability (blue) zone around zero to accept the null, and in the red 5% area to accept the alternate. This 5% threshold is usually called significance level and is given the symbol \(\alpha\).

Using a threshold of 5% crudely speaking means we'll be wrong 5% of the time. Let's imagine a company running 100 tests in a year, this threshold means they'll be wrong in about 5 cases.

Surely this is enough? Surely we can now do this calculation and use \(\alpha\) to say pass/fail? No. We have assumed the null is true. But we also need to do the opposite and assume the alternate is true.

Assuming the alternate is true

Now, we assume the alternate is true, that \( c_T - c_C \neq 0\). We can plot this out as a normal distribution too, but there's a difference. When we considered the null hypothesis to be true, we considered both sides of the normal curve, but here we only care about one side of the distribution. Remember, we're looking at the difference \( c_T - c_C \), so one side of the curve 'points' towards zero (no difference), and the other side points towards a bigger difference. We only care about the side that 'points' towards zero. 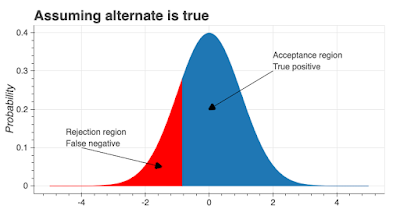 For reasons I won't go into, the threshold value is called the power of a test and is given by \(1-\beta\). Typical values of power range from 80% to 95%, but 80% is considered a minimum threshold. I'll have a lot more to say about power in another blog post.

Usually, the two charts I've shown you are shown looking like this. The sample sizes are chosen so that \(\alpha\) and \(\beta\) line up. 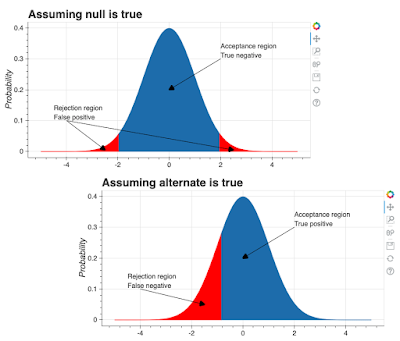 For our A/B test, here are the simplified steps in the process.

When people new to statistics get involved in A/B testing, they sometimes make the mistake of focusing only on confidence (and p-values). This gives them insight into false positives, but it says nothing at all about false negatives. To put it bluntly, this incorrect process puts all the emphasis on the risk of doing something, but none at all on the risk of doing nothing. This kind of focus also leads to tests that are too short to be reliable.

Why not just set the thresholds higher?

The widths of the normal distributions I've shown depend on the number of samples. The more samples there are, the narrower the curve. The thresholds depend on the narrowness of the curve. To put it simply, increasing confidence and power mean increasing the number of samples in the test, which means a longer test. So all we need to do is increase the length of the test? Not so fast, the relationship isn't a linear one. Increasing power or significance by a few percentage points could double the length of the test depending on what the power and significance levels are.

Where do these thresholds come from?

The choice of a confidence value of 95% is arbitrary and comes from statistical standard practice. There's a fierce ongoing debate in the social sciences about whether this threshold is appropriate; an emerging view is that it's loo lax a standard. In a recent paper in Nature, Benjamin et al [Benjamin] argued passionately that 99.5% is a better threshold.

Something similar applies to power. The 'industry standard' is 80%, a figure with a far murkier background [Cohen]. In my view, using this figure of 80% is wrong in almost all cases. 80% is a minimum. I'll have a lot more to say about power in another blog post.

Eye of newt and toe of frog...

The process for deciding an A/B test reads like a witches' brew recipe rather than a scientific process. It's reliant on arbitrary thresholds, some difficult concepts, and confusing language. The null hypothesis test itself is a shot-gun marriage of techniques. Unsurprisingly, p-values are widely misinterpreted and misunderstood [Amrhein].

Fundamentally, the whole process is a witches' brew; it works, but it's not satisfying.