Growing up in the UK, I never really understood Asia well. I heard the usual mix of opinions; that ‘they’ had developed their economies by adopting the free market, that there was something special about Asian societies that favored prosperity, and of course, that 'they' cheated and stole intellectual property. 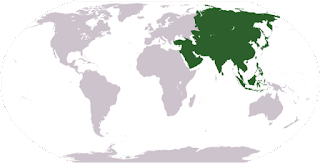 Years ago, I visited South Korea, China, Japan, and Taiwan. Immediately, I realized that what I’d read and understood was mostly wrong or at best very distorted. Even worse, the popular narratives in the west were pretty useless for understanding what I saw and heard.

Recently, I read a very illuminating book, “How Asia Works” by Joe Studwell.  Studwell provides a much better model for understanding Asia than anything I’d read before and I’m going to provide a quick overview of Studwell’s ideas here. I recommend you read his book.

Studwell divides Asia into two broad groups: the successful trinity of Taiwan, South Korea, and Japan, and everyone else. China is of course a special case, but similar in many ways to the successful trinity. He immediately does away with geography and culture as factors explaining why the trinity were successful and others were not. Instead, he focuses on the development policies they followed and how they executed them.

In his view, there are three key drivers responsible for the rise of Japan, South Korea, and Taiwan; agriculture, industry, and finance. Behind these three drivers, there were crucial policies that enabled these countries to rise, but perhaps more important than the policies was the disciplined execution behind them.

To set the scene, at the start of his narrative, all the countries were relatively poor with little industry. Each of them had large populations and each had a desire to develop and improve the lives of their people. 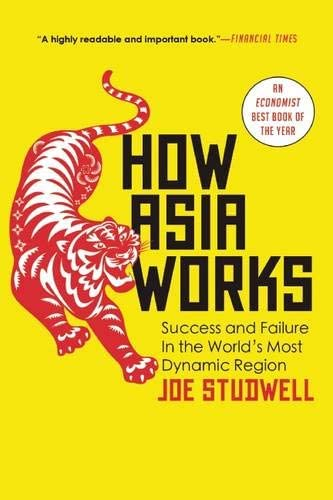 Studwell’s key insight into agriculture is the difference between productivity and efficiency. We can define productivity as the human consumable output per hectare and efficiency as the human consumable output per hour of human effort. Gardens are typically much more productive than farms at the cost of being more effort-intensive (less efficient) because gardeners plant their crops closer together and make better use of limited space, the price of which is substantial human effort to maintain and harvest crops. Poor countries typically have lots of people they need to feed and little foreign exchange to pay for imported food. It makes a great deal of sense therefore to use their labor in highly productive agriculture, which usually means smallholdings.

This is Studwell’s first key policy insight. Encouraging smallhold farming requires land reform. When people work for themselves and their families, they’re much more motivated to produce than when they’re tenants on someone else’s property. Each of the four countries, Japan, South Korea, Taiwan, and China all pursued land reform which involved redistributing land to smallhold farmers.  In all cases, landlords took a beating and saw little compensation for losing their lands. In each case, the countries were disciplined and prevented landlords from re-establishing control. All four countries saw agricultural productivity sharply rise. Rising agricultural productivity meant reduced food imports, agricultural exports to generate foreign exchange, and a surplus that was used to create demand for industrial output.

Other countries in Asia tried land reform but allowed landlords backdoors to rebuild their property portfolios. Although productivity rose in these countries, it wasn’t anything like the rise in Japan, Taiwan, South Korea, and China. It seems like a disciplined approach to land reform is key.

Land reform also sheds some light on why the Soviet and Chinese experimentation with collective farming was a disaster; it destroyed the incentive for people to produce more for their families. Collectivization wiped out China’s agricultural productivity gains.

Industry is the next step. Studwell makes the same observation that everyone else does; textiles are the usual industrialization starting point because the skill set needed is relatively low. After textiles come other low-skilled products with countries working their way up the value chain to cars and semiconductors. The successful countries placed high import tariffs to protect their infant industries from more advanced foreign competition (again, deviation from free-market doctrine). They made capital available at low interest rates to encourage company formation and growth, but crucially, they created a highly competitive internal market with companies forced to compete against each other (but not against foreign competition). The key policy was a disciplined focus on exports. South Korea tied access to capital to foreign export targets; if your company hit its export targets you could get money, if it didn’t, you wouldn’t get money. This ensured export-led growth. Bear in mind that well-developed export markets usually have higher standards than developing domestic markets, so this policy forces manufacturers to meet higher foreign standards right from the start. He gives the example of a car produced by Malaysia’s Proton that lacked airbags and other safety features required for foreign markets, meaning the car could only be sold in Malaysia, limiting sales. Cars require imported parts, so a car produced for domestic consumption only means a hit to foreign currency reserves. 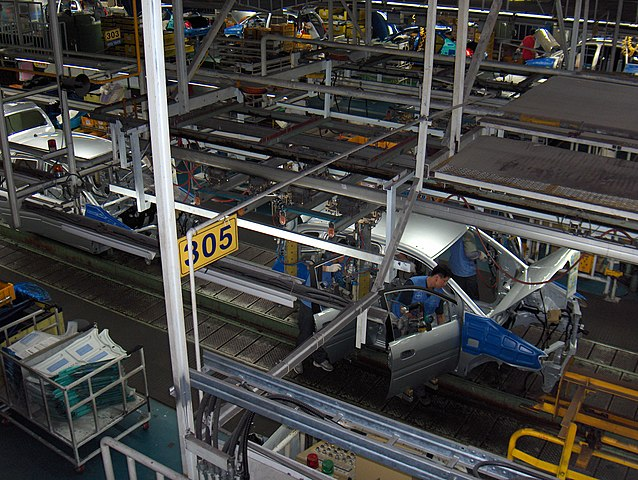 Studwell made a comment that hit me between the eyes and woke me up. A highly competitive domestic market coupled with disciplined export-focused finance led to companies failing. Governments didn’t step in to prop up failing companies, rather they allowed the survivors to pick apart the carcass of the dead company. It’s not about governments picking winners, it’s about governments culling losers, but using a version of the fee market to do so. Over the years in the UK, I’ve seen various attempts to build national champions in different segments, I can remember talk of “wasteful competition”, “world beaters”, and other rhetoric. It seems the successful Asian countries had a much better Darwinian survival-of-the-fittest approach. It’s cage match economics, but it works.

The last part of Studwell’s trinity was finance; a disciplined approach to finance is what holds the entire thing together. In the agricultural stage, the goal is to finance smallhold farmers to enable them to buy fertilizer and the equipment they need to develop their farms. In the manufacturing stage, finance was tied to exports with very few exceptions. Disciplined finance becomes an extension of government development policy; countries that didn’t follow a disciplined path did not see the same level of investment. He points out that several countries used foreign investment to finance luxury real-estate developments that promised high short-term returns. Unfortunately, these types of projects don’t generate much foreign exchange and don’t offer long-term employment. The point is simple: don’t chase the highest returns, use finance to support strategic development initiatives. Once again, this runs counter to much free market economic thought.

Studwell’s model explains much of what I heard in Asia, for example, it explains why joint ventures are usually structured in the way they are. It also helps explain why South Korea, Japan, and Taiwan used currency controls for as long as they did. Conversely, it explains why development in other parts of Asia was so stunted.

For me, one of the benefits of reading the book was helping me shake off the intellectual straitjacket of western free market economics. Successful Asian countries embraced some key free market ideas (“culling losers”) but rejected “the invisible hand” laissez-faire idea; governments very actively intervened in markets. It seems that development in the real world is not about intellectual purity but about what works.

The obvious questions for me are where next for the successful countries, will they continue with activist government intervention, and conversely, will the unsuccessful countries learn lessons from the winners? It left me thinking more broadly about the west, if we accept the premise that governments should intervene in markets, how could we improve life for people in the west?

Posted by Mike Woodward at 1:38 PM No comments: