I won an award! How to lose by winning

Sometimes, companies try and do a good thing but go about it so poorly, they end up doing something bad.

A few years ago, I worked for a large company. I got to a work anniversary which triggered an award; a plastic slab I was supposed to display on my desk. How it was delivered was eye-opening. 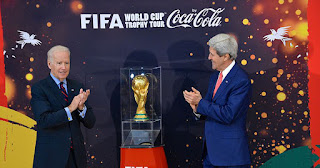 (Winning a trophy like this would be meaningful. Image source: Wikimedia Commons. License: Public Domain.)

I was working at a different office from my manager, so the award was sent directly to me, including the written instructions to my manager on how to give me the award.

How to do it wrong

The award was a tombstone-shaped piece of transparent plastic with some vaguely encouraging words embossed on it. Other than the company logo, there was no customization of any kind (not even the employee's name), it was completely generic. The instructions gave a formal pattern for how the plastic was to be awarded. They went something like this:

I told my manager that this had happened and we both laughed. I told him I was going to have an award ceremony for myself and hand myself the award using the instructions in the box. He chuckled and told me to go for it. In other words, the whole thing meant nothing to either of us.

Obviously, the company's intention was to thank employees for not leaving. They'd thought it through sufficiently well enough to have a trophy that would be displayed on desks and that wouldn't cost very much. Of course, the goal of the ceremony was to celebrate the individual and make them feel special.

Unfortunately, the trophy wasn't meaningful to anyone - it didn't even look good. The instructions left a bad taste in my mouth. My guess is, the leadership was trying to reach managers who wouldn't normally celebrate individuals' contributions. By mandating the form of the ceremony, they were trying to introduce consistency and enforce meaning, but by describing the ceremony in detail, they undermined managers - this was a form of micro-managing and hinted at bigger issues with managers' people skills.

How to do it right

By contrast, I worked for another large organization that made a very big deal of work anniversaries. People who reached a significant anniversary were called into a big meeting and personally thanked by the CEO. There were meaningful gifts for reaching multiples of 5 years. Looking back on that experience, I believe the company, and the CEO were sincere - they put a lot of effort into thanking and recognizing people. The fact that the recognition was led by the CEO made a huge difference.

Employee recognition is a fraught topic and work anniversaries can be tricky. Do you celebrate or not and why? If you do celebrate, then it needs to be meaningful and focused on the person; you can't fake or mandate sincerity. If you're going to do it, do it well.

Posted by Mike Woodward at 8:46 AM