Is it easier for a sports team to win at home? The evidence from sports as diverse as soccer [Pollard], American football [Vergina], rugby [Thomas], and ice hockey [Leard] strongly suggest there is a home advantage and it might be quite large. But what causes it? Is it the crowd cheering the home team, or closeness to home, or playing on familiar turf? One of the weirder side-effects of COVID is the insight it's proving into the origins of home advantage, as we'll see. 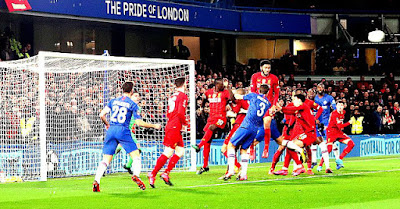 The English Premier League is the world's wealthiest sports' league [Robinson].  There's worldwide interest in the league and there has been for a long time, so there's a lot of data available, which makes it ideal for investigating home advantage. One of the nice features of the league is that each team plays every other team twice, once at home and once away.

Let's look at the mean home win proportion per season for the EPL. In the chart, the error bars are the 95% confidence interval. 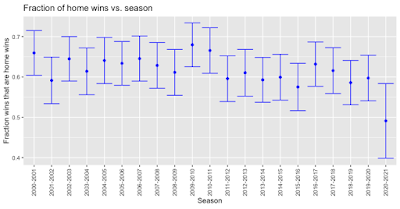 For most seasons, the home win proportion is about 0.6 and it's significantly above 0.5 (in the statistical sense). In other words, there's a strong home-field advantage in the EPL.
But look at the point on the right. What's going on in 2020-2021?

What about goals? It's possible that a team that might have lost is so encouraged by their fans that they reach a draw instead. Do teams playing at home score more goals?
I worked out the mean goal difference between the home team and the away team and I've plotted it for every season from 2000-2001 onwards. 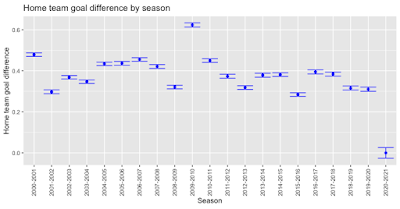 Despite the roll-out of the vaccine, it's almost certain the rest of the 2020-2021 season will be played behind closed doors (assuming the season isn't abandoned). My results are for a partial season, but it's a good bet the final results will be similar. If this is the case, then it will be very strong evidence that fans cheering their team really do make a difference.
If you want your team to win, you need to go to their games and cheer them on.