Drunk and disorderly: not funny at company events

Maybe I'm getting more puritanical as I get older, but I'm finding myself less and less tolerant of drunken loutishness at corporate events. I've seen too many instances where people have got away with poor behavior to the detriment of others, and to the detriment of the organization as a whole. Let me tell you my stories, some of the details have been disguised to protect the guilty. 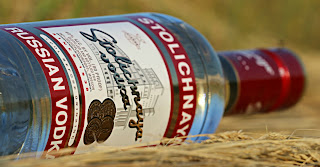 One fine summer evening, the company I worked for held a large-scale open-air event. The aim was to play summer outdoor games and enjoy a drink or two in the company of our colleagues. The venue was extremely proud of its grounds and had obviously spent a lot of money creating and maintaining immaculate grass playing surfaces. Some of my colleagues realized there was no limit at the bar and set out to get drunk on company money; a task they succeeded at admirably. One of them decided it would be really funny to plant his glass in the middle of the grass. He turned his glass upside down and stomped it into the lawn. His friends thought this was funny, so they did it too. The next day, the groundskeepers discovered the stomped glasses and had to fix the damage, which meant the venue was unavailable for others. Net result? The company paid a penalty to repair the lawn and was banned from the venue (the only venue like it for miles). Everyone knew who the stompers were, but they got away with it.

Christmas time seems to bring out the worst in some people at corporate events. I was at a large-scale company Christmas lunch where a lot of alcohol had been consumed. One of the employees decided it would be fun to start throwing food at other tables. The food fight escalated until someone soaked a small tablecloth in water, screw it up into a ball, and threw it at another table. It hit the other table like a bomb, exploding a carafe of red wine, splattering everyone in red wine and glass fragments. This was plainly very upsetting for the people on the table and brought the event to an end. Obviously, the company was banned from the venue, but this time I believe someone did have a word with one of the perpetrators and there was managerial discussion of curtailing bad behavior.

Corporate events held away from home can be a lot of fun, but there can be problems too. I was at a corporate event held in a resort venue and I witnessed some unfortunate things. There was a mix of company people, who were getting everything for free, and vacationers, who had paid to stay at the resort. It was not a happy combination. The company people were away from family, off the leash, and with unlimited free alcohol. On the whole, their behavior towards paying guests was disrespectful at best. At one of the resort bars, I got chatting to a vacationing couple who complained to me about poor treatment from my work colleagues. The vacationers were very unimpressed by the rude and drunken behavior they saw. This was not a good company image to project.

I'm happy to say, I haven't seen drunken behavior at my current employer and I think I know why. The company has taken great pains with recruitment and boorish behavior just isn't part of company culture. As a manager, I would be on top of drunken misbehavior immediately, and I believe my fellow managers would do the same too.

Advice to managers: stop it dead

Along with most managers, I've read my fair share of legal documents, case studies, and guidance. Pulling all this together, here are my thoughts:

I'm not against people having a drink at company events, I'm not even against people getting drunk at events, but I am against harmful behavior toward others. I want everyone to feel safe and to be safe.

Posted by Mike Woodward at 6:22 PM