Being more persuasive in speech: anaphora

There are a host of rhetorical techniques known since antiquity to make you more persuasive and compelling as a speaker. Anaphora is one of them and it's in my top three convincing rhetorical techniques. It’s been used by everyone from Charles Dickens to Winston Churchill to Chance the Rapper. I’m going to tell you what it is and how you can use it.

Anaphora is the repetition of the same phrase at the start of adjacent clauses in a sentence or paragraph. Here’s an example from Charles Dickens' ‘A Tale of Two Cities’. The anaphora is in bold.

Another good example of anaphora is the poem ‘If’ by Rudyard Kipling, here’s an extract:

If you can dream—and not make dreams your master;
If you can think—and not make thoughts your aim;
If you can meet with triumph and disaster
And treat those two impostors just the same;
If you can bear to hear the truth you’ve spoken
Twisted by knaves to make a trap for fools,…
-If – Rudyard Kipling

Pretty much the entire poem is anaphora which he uses to build towards his point at the end.

Anaphora works by the repetition of the same words to link ideas into a coherent and memorable flow. It reinforces the point in an elegant way.

As you've seen, anaphora is effective in writing, but it also works well in speeches too. It can have a compelling and convincing effect as we’ll see. I’m going to play you an example of one of the most famous examples of anaphora. This time, I’ll give you some context for the speech before providing the audio link.

The year is 1940. France had fallen to the Nazi hordes and the disaster at Dunkirk had just occurred. The British people expected Hitler’s armies to cross the channel and invade imminently. Britain stood alone.

The place is the House of Commons in London. MPs too expected an invasion and expected Britain to fall. They knew many of their constituents, families, and friends would die.

And the person is Winston Churchill, the new Prime Minister. His job was to rally the nation and prepare the country for invasion and an existential fight.

Here’s the most famous piece of his speech - YouTube. Listen to the anaphora. 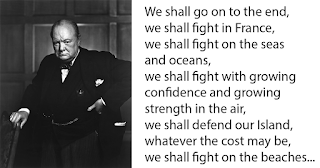 We shall fight… we shall never surrender.

The effect of this speech was electrifying. A friend told Churchill his speech was worth 1,000 guns. Opposition politicians openly wept and pledged support for Churchill. And this speech changed the national mood from one of defeat to one of defiance in the face of disaster.

So how might you use anaphora? Let’s imagine you’re giving a talk where you’re trying to persuade your company to spend resources on training, you could say:

The research shows that investing in training gives returns on staff retention, recruitment, and efficiency.

Or you could use anaphora to say:

I’ve used anaphora in speeches and in writing. You can too. It’s a great device to use when you have multiple points you want to make and you need to link them together.

Let’s listen to how Chance The Rapper used anaphora to link his points together: YouTube. The 'Oh now' anaphora allows him to construct a series of lyrical points and link them together with the same structure to make them work together in a catchy way. (As an aside, rap and hip hop artists make incredibly inventive use of language - something they never get credit for.)

This blog post is one in a series of posts on practical rhetoric. Here's the series: