Presentation advice from a professional comedian

In 2019, I heard a piece of presentation advice I'd never heard before. It shook me out of my complacency and made me rethink some key and overlooked aspects of giving a talk. Here's the advice:

"You should have established your persona before you get to the microphone."

There's a lot in this one line. I'm going to explore what it means and its consequences for anyone giving a talk. 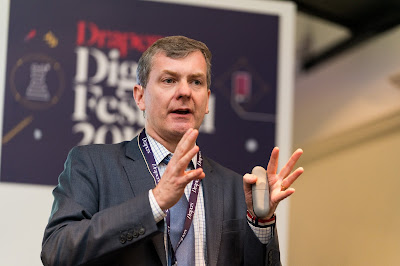 (Me, not a professional comedian, speaking at an event in London. Image credit: staff photographer at Drapers.)

Your stage persona is who you are to the audience. People have expectations for how a CEO will behave on stage, how a comedian will behave, and how a developer will behave, etc. For example, let's say you're giving a talk on a serious business issue (e.g. bankruptcy and fraud) to a serious group (lawyers and CEOs), then you should also be serious. You can undermine your message and credibility by straying too far from what people expect.

One of the big mistakes I've seen people make is forgetting the audience doesn't know them. You might be the funniest person in your company, or considered as the most insightful, or the best analyst, but your stage audience doesn't know that; all they know about you is what you tell them. You have to communicate who you are to your audience quickly and consistently; you have to bend to their expectations. This is a lesson performers have learned very well, and comedians are particularly skilled at it.

If they think about their stage persona at all, most speakers think about what they say and how they say it. For example, someone giving a serious talk might dial back the jokes, a CEO rallying the troops might use rhetorical techniques to trigger applause, and a sales manager giving end-of-year awards might use jokes and funny anecdotes. But there are other aspects to your stage persona.
Let's go back to the advice: "you should have established your persona before you get to the microphone". In the short walk to the microphone, how might you establish who you are to the audience? As I see it, there are three areas: how you look, how you move, and how you interact with the audience.

How you look includes your shoes and clothing and your general appearance (including your haircut). Audiences make an immediate judgment of you based on what you're wearing. If I'm speaking to a business audience, I'll wear a suit. If I'm talking to developers, I'll wear chinos and a shirt (never a t-shirt). Shoes are often overlooked, but they're important; you can undermine an otherwise good choice of outfit by a poor choice of shoes (usually, wearing cheap shoes). Unless you're going for comic effect, your clothes should fit you well. Whatever your outfit and appearance, you need to be comfortable with it. I've seen men in suits give talks where they're clearly uncomfortable with a suit and tie. Being obviously uncomfortable undermines the point of dressing up - to be blunt, you look like a boy in a man's clothes.

How you move is a more advanced topic. You can stride confidently to the microphone, or walk normally, or walk timidly with your head down. If you're stressed and tensed, an audience will see it in how you move. By contrast, more fluid movements indicate that you're relaxed and in control. What you do with your hands also conveys a message. Audiences can see if you have a death grip on your notes or if you're using your hands to acknowledge applause. Think about the stage persona you want to create and think about how that person moves to the microphone. For example, if you're a newly appointed CEO, you might want to establish comfortable authority, which you might try and do by the way you walk, what you do with your hands and how you face the audience.

In short: think about the seconds before you begin talking. How might you communicate who and what you are without saying a single word?

Where did I hear this advice? I've been listening to a great podcast, 'The Comedian's Comedian' by Stuart Goldsmith, a UK comic. Stuart interviews comics about the art and business of comedy. In one podcast, a comedian told the story of advice he'd received early in his career. The comedian was saying that after five years of performing, he'd managed to establish his stage persona within a minute or so of speaking. The advice he got was: "You should have established your persona before you get to the microphone."

A good presentation is a subtle dialog between the presenter and the audience. The speaker does or says something and the audience responds (or doesn't). Comedians are the purest example of this, they respond in the moment to the audience and they live or die by the interaction. If communicating your message to your audience is important to you, you have to interact with them - including the moments before you begin speaking. Ultimately, all presentations are performance art.