A few years ago, I was working at an excellent company (BitSight). The only problem was, I felt the office was too hot or too cold. I bought a temperature/humidity sensor and reverse engineered the control system to build my own UI to control the device. Here's the story of how I did it. If you want to learn how to reverse engineer a sensor interface, this story might be useful to you.

My great colleague, Philip Gladstone, suggested the way forward. He said, why not reverse engineer the commands and data going back and forth over the USB port so you can write your own control software? So this is what we did. (Philip got the project started, did most of the USB monitoring, and helped with deciphering commands.)

The first step was monitoring the USB connection. We got hold of a Windows machine and ran some USB monitoring software on it. This software reported the bytes sent back and forth to the UT330B. The next step was to load up and run the UT330B control software. Here's the big step; we used the control software to get the device to do things and monitored the USB traffic. From that traffic, we were able to reverse engineer the commands and responses.

The first thing we found was that every command to the device had a particular form:
[two byte header] [two byte command] [two byte modbus CRC]
e.g
0xab 0xcd 0x03 0x18 0xb1 0x05
(this is the command to delete data from the device)
we were able to infer how the command bytes related to actual commands (e.g. 0x03 0x18 means delete data). In some cases, we found pressing one button on the control software resulted in several commands to the device.

The next step was figuring out the CRC. Given the data we had and our knowledge that the CRC was two bytes, I set about looking for CRC schemes that would give us the observed data. I found the UT330B used a modbus CRC check.

Now I could replicate every command to the UT330B.

Figuring out the device data format came next. The device data was what the UT330B sent back in response to commands. Some of this was straightforward, e.g. dates and times, but some of it was more complex. To get a full range of device temperatures, I put the UT330B in a freezer (to get below 0c) and held it over a toaster to get over 100c. Humidity data was a little harder, I managed to get very high humidities by holding the device in the output of a kettle but I had to wait for very dry days to get low humidities. It turns out, data was coded using two's complement (this caused me some problems with negative temperatures until I realized what was going on).

So now I knew every command and how to interpret the results.

Writing some Python code was the next order of business. To talk to the UT330B via the USB port, we needed to use the PySerial library. The UT330B used a Silicon Labs chip, so we also needed to download and install the correct software. With some trial and error, I was able to write a Python class that sent commands to the UT330B and read the response. Now I was in complete control of my device and I didn't need the Windows command software.

A class is fine, but the original command software had a nice UI where you could plot charts of temperature and humidity. I wanted something like that in Python, so I used the Bokeh library to build an app. Because I wanted a full-blown app that was written properly, I put some time into figuring out the software architecture. I decided on a variant of the model-view-controller architecture and built my app with a multi-tab display, widgets, and of course, a figure.

Here are some screenshots of what I ended up with. 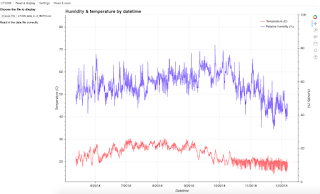 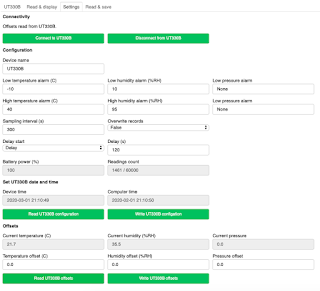 The complete project is on Github here.

So what did I learn from all of this?

Posted by Mike Woodward at 7:30 AM