Company culture and the hall of mirrors

When I was a child, my parents took me to a funfair and we walked through the hall of mirrors. The mirrors distorted reality, making us look taller or smaller, fatter or thinner than we really were. I've read a number of popular business books that extoll the virtues of company culture, but I couldn't help feeling they were a hall of mirrors; distorting what's really there to achieve higher book sales. 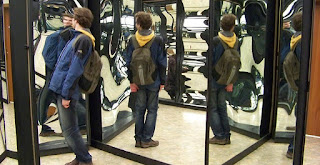 I was fortunate enough to spend time researching the academic literature on company culture to understand what's really there, and the results surprised me. I took a course at the Harvard Extension School on Organizational Behavior which was taught by the excellent Carmine Gibaldi. Part of this course was a research project and I chose to look at the relationship between company culture and financial performance.

What books claim vs. evidence

Given the long list of popular business books making very definitive claims about company culture, you might expect the research literature to show some clear results. The reality is, the literature doesn't. In fact, when I investigated the support for claims made in books, I couldn't find much in the way of corroborating evidence. Going back to the popular books, I found no references in many cases, in other cases I found evidence based on the author's work alone, and in other cases, the evidence was just unverified anecdotes. What I did find in the research literature was a more complex story than I expected.

What I found is that there are mechanisms by which a strong and unified company culture can lead to better performance; coordination and control, goal alignment, and enhanced employee effort. For these reasons, under stable market conditions, a strong culture does appear to offer competitive advantages. However, under changing market conditions, a strong culture may be a disadvantage because strong cultures don't have the variability necessary to adapt to change. There also seemed to be a link between culture and industry, with some cultures better suited to some industries.

I read about DEC, Arthur Anderson, and Enron. All companies with strong cultures and all companies that had been held up at the time as examples of the benefits of a strong culture. DEC's culture had been studied, extensively written about, and emulated by others. Enron had several glowing case studies written about them by adoring business schools. In all these cases, company culture may well have been a factor in their demise. Would you take DEC or Enron as your role model now? Are the companies you're viewing as your role models now going to be around in five or ten years?

Am I falling into the trap of not providing you with references for my assertions? No, because I'm going to go one stage further. I'm going to give you a link to what I wrote that includes all my references and all my arguments in more detail. Here's the report I wrote which lays out my findings - you can judge for yourself. 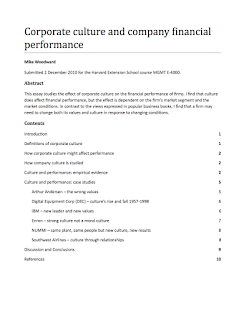 During my research, I read some detailed critiques of popular business books. I must admit, I was shocked at the extent to which the Emperor really has no clothes and the extent of the post hoc fallacy and survivor bias in the popular books. Many of the great companies touted in these books have fallen from grace, disproving many of the assertions the books made. If you make statements that company culture leads to long-lasting success, and your champions fail while maintaining their values, it kind of looks like your arguments aren't great. Given the lack of research support for many business books' claims, this should come as no surprise.

Here's my advice: any popular business book that purports to reveal a new underlying truth about business success is probably wrong. Before you start believing the claims, or extolling the book's virtues, or implementing policy changes based on what you've read, check that the book stands up to scrutiny and ideally, that there's independent corroboration.