How to be more persuasive when you speak: using ‘catchphrases’

One of the most famous speeches in history used ‘catchphrases’ for incredibly powerful effect; you’ll know the speech by its catchphrase alone. I’ve seen modern American politicians use the same rhetorical technique to heighten energy and to unify and drive home their message. You can use it in your speeches too; I’m going to show you how and why.

Like many rhetorical techniques, this one relies on the considered use of repetition. Specifically, it’s the repetition of a phrase or sentence throughout a speech as a kind of catchphrase.

Let me give you an example. Let’s say you’re an engineering leader and you’re trying to convince your team to take data security seriously. Using this technique, your speech might look something like this (catchphrase in bold).

If we lapse in securing our data, our company can be fined large amounts of money, putting our livelihoods at risk. By being secure, we prevent this from happening.

Security is our security.

If we have a data breach, our reputation will be sullied and it’ll be harder for us to win new business, with all that entails.

Security is our security,

Companies have suffered data breaches of employee data too, putting social security numbers and other personal information out on the web for the highest bidder.

Security is our security,

Speakers use this approach to draw the audience’s attention to a key theme again and again and again, they use it to unify and focus a speech. It drives the point home in a forceful, but elegant way.

My real example is by an influential African-American christian preacher. He repeats one of the most famous lines in rhetoric as a catchphrase again and again. You’ll know it as soon as you hear it – in fact, you already know the words. Here's the YouTube link to the appropriate section. 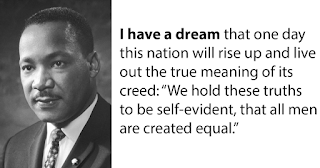 Here’s part of his speech, the catchphrase is in bold.

I have a dream that my four little children will one day live in a nation where they will not be judged by the color of their skin but by the content of their character.

I have a dream today.

I have a dream that one day, down in Alabama, with its vicious racists, with its governor having his lips dripping with the words of interposition and nullification; one day right there in Alabama, little black boys and black girls will be able to join hands with little white boys and white girls as sisters and brothers.

I have a dream today.

I’ve done my homework on rhetoric and searched for this method in the books on techniques from antiquity. As far as I can tell, this technique is known as epimone. It's not one of the famous techniques and I think it's very underrated.

It seems to be used a lot in African-American christian preaching and has spread to American politics from there. (As an aside, I've looked for resources on the analysis of rhetorical techniques used in African-American churches, but I've not been able to find any good ones. If any one knows of some good analysis, please let me know.) I've heard a well-known American politician use it and I suspect we'll be hearing it more as we head into election season. Bear in mind that politicians use techniques like this deliberately because they know they work.

Here’s my recommendation for using this technique; if you’re trying to persuade or emotionally influence an audience, use it to hammer home your message and provide a simple unifying concept for people to take to heart.

This blog post is one in a series of posts on practical rhetoric. Here's the series:
Posted by Mike Woodward at 4:19 PM