The art of persuasion: pathos, logos, and ethos

The art of persuasion is ancient

In this blog post, I'm going to talk about three high-level approaches to persuasion that people have used for thousands of years: pathos, logos, and ethos. Aristotle codified them, hence their Greek names, but despite their ancient origins, they pop up in modern sales methods, in the speeches given by politicians, and in preachers' sermons. Understanding these basics will let you craft more effective speeches and emails. 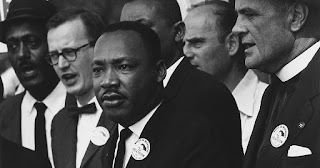 (Martin Luther King was one of the best rhetoricians of the 20th century. King used pathos enormously effectively in his 'I have a dream speech'. Image source: Wikimedia Commons. Photographer: Rowland Scherman.)

Sadly, this is the weakest of the three, it's the appeal to logic; the use of facts and figures, and inference and deduction to make an argument. For example, if I were trying to make the case that the economy was great under my leadership, I might talk about high employment numbers, pay rises, and business growth. My chain of reasoning would be: the numbers are great due to my leadership, so you should vote for me. Let's look at a couple of real examples.

My first example is Winston Churchill's "Their finest hour speech" (you can read more analysis of this speech here):

"‘Hitler knows that he will have to break us in this Island or lose the war. If we can stand up to him, all Europe may be free and the life of the world may move forward into broad, sunlit uplands.’"

Note there are no numbers here, it's a chain of logic linking one idea to another, in this case, an if-then piece of logic.

John F. Kennedy also used logos. Here's an excerpt from his famous "We choose to go to the moon..." speech:

"Within these last 19 months at least 45 satellites have circled the earth. Some 40 of them were made in the United States of America and they were far more sophisticated and supplied far more knowledge to the people of the world than those of the Soviet Union."

Note the use of numbers to make the point that the United States was ahead of, and more advanced than the Soviet Union. Logos isn't just about making cold scientific claims, it can be about bashing your opponents with logic.

Margaret Thatcher was a master speaker, and she used logos to batter her opponents:

"If the Labour Government is no longer able to act in the national interest, is there no alternative to the ruin of Britain? Yes, indeed there is - and that alternative is here at Brighton today."

The point is, logos isn't about a mathematical deduction, it's about creating a chain of arguments to lead the audience to the conclusion that your point is true.

In sales situations, logos is used in several ways, for example, a salesperson might say something like: "Our solution costs less on a yearly basis than competitor Y but has features A, B, and C that Y does not."

This is an appeal from authority, the idea is that the speaker has some kind of position that gives them special knowledge. The most obvious example is the old quote: "Trust me, I'm a doctor". Speakers use this device a lot to establish credibility, for example, you might hear people talk about years of government service, or their qualifications, or their awards.

One of the best examples of ethos I've come across is Steve Jobs Stanford Commencement address of 2005. Pretty much, the whole speech is ethos, establishing his credibility with the audience. Here's a small extract:

"I was lucky — I found what I loved to do early in life. Woz and I started Apple in my parents’ garage when I was 20. We worked hard, and in 10 years Apple had grown from just the two of us in a garage into a $2 billion company with over 4,000 employees. We had just released our finest creation — the Macintosh — a year earlier, and I had just turned 30."

A salesperson might co-opt ethos by talking about the awards and success of their company or product, for example, "Product X was the biggest selling product in category Y, it's the industry standard." They also use external references from trusted sources. Gartner's magic quadrant analysis is widely used for a reason, it lends external credibility and is a great source of ethos. Success stories serve similar purposes too; you can use a quote from an industry figure to boost your credibility.

This is an emotional appeal to do something. It's is one of the most effective persuasive techniques, but it has to be used carefully; it's a blunt instrument that can undermine your argument. One of the clearest examples of pathos also illustrates the problem: "do as I ask or I kill this kitten".

I'm going to return to Winston Churchill and another of his famous speeches for my first example, here's a famous extract:

"I would say to the House, as I said to those who have joined this government: “I have nothing to offer but blood, toil, tears and sweat.”"

Churchill's goal was to get the politicians and the people to join him in an existential struggle against fascism. He used vivid imagery to illustrate the struggle ahead. If logos is the use of facts and figures, pathos is the use of adjectives and adverbs.

One of my other favorite speakers is Martin Luther King, here's an extract from his most famous speech:

King is using evocative language to appeal to his audience, to motivate them to appeal for change.

I've seen salespeople use pathos in a clever way when they ask a prospect what the success of product would mean for them. The crude example here is telling someone they would look good in a sports car. Less crudely, the success of a product could lead to promotions. This has to be artfully done, but I've seen it used very effectively.

Using them in a speech

Not every speech uses all the elements of persuasion, but many of them do. Let's imagine you're promoting your company's product at a convention and had a short slot to do it. Here's how you might use pathos, logos, and ethos.

This is a little crude, but you get the general idea.

Churchill, Kennedy, and King did not just make up their speeches. They knew very well what they were doing. Churchill and King in particular were master rhetoricians, adept at using words to change the world. Knowing a little of rhetoric can pay dividends if you're trying to be more persuasive.

A lot of books on rhetoric are unreadable, which is odd given that rhetoric is about communication. Here are some of the ones I like:

This post is part of a series of posts on rhetoric for managers. Here are the other posts in the series:

Posted by Mike Woodward at 1:37 PM