Who will win the election? Election victory probabilities from opinion polls

How likely is it that your favorite candidate will win the election? If your candidate is ahead of their opponent by 5%, are they certain to win? What about 10%? Or if they're down by 2%, are they out of the race? Victory probabilities are related to how far ahead or behind a candidate is in the polls, but the relationship isn't a simple one and has some surprising consequences as we'll see.

Let's imagine there's a hard-fought election between candidates A and B. A newspaper publishes an opinion poll a few days before the election:

The spread and standard error

Let's use some standard notation. From the theory of proportions, the mean and standard error for the proportion of respondents who chose A is: 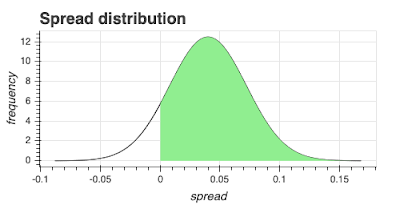 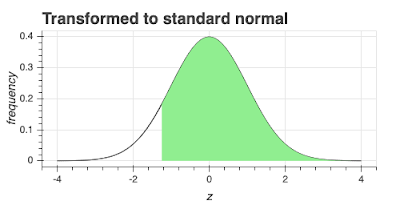 What we have is an equation that takes data we've derived from an opinion poll and gives us a probability of a candidate winning.

Probabilities for our example

Obviously, the two probabilities add up to 1. But note the probability for candidate A. Did you expect a number like this? A 4% point lead in the polls giving a 90% chance of victory?

Because the probability is based on \( erf \), you can quite quickly get to highly probable events as I'm going to show in an example. I've plotted the probability for candidate A for various leads (spreads) in the polls. Most polls nowadays tend to have about 800 or so respondents (some are more and some are a lot less), so I've taken 800 as my poll size. Obviously, if the spread is zero, the election is 50%:50%. Note how quickly the probability of victory increases as the spread increases. 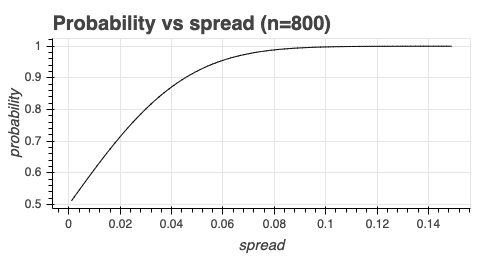 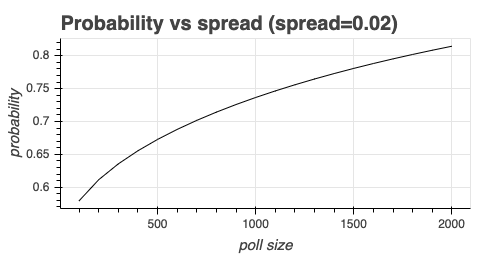 Now imagine you're a cynical and seasoned poll analyst working on candidate A's campaign. The young and excitable intern comes rushing in, shouting to everyone that A is ahead in the polls! You ask the intern two questions, and then, like the Oracle at Delphi, you predict happiness or not. What two questions do you ask?

There are two elephants in the room, and I've been avoiding talking about them. Can you guess what they are?

All of this analysis assumes the only source of error is random noise. In other words, that there's no systemic bias. In the real world, that's not true. Polls aren't wholly based on random sampling, and the sampling method can introduce bias. I haven't modeled it at all in this analysis. There are at least two systemic biases:

Understanding and allowing for bias is key to making a successful election forecast. This is an advanced topic for another blog post.

The other missing item is more subtle. It's undecided voters. Imagine there are two elections and two opinion polls. Both polls have 1,000 respondents.

The best source of election analysis I've read is in the book "Introduction to data science" and the associated edX course "Inference and modeling", both by Rafael Irizarry. The analysis in this blog post was culled from multiple books and websites, each of which only gave part of the story.