What do Presidential approval polls really tell us?

This is a technical piece about the meaning of a type of polling. It is not political in favor of or against President Trump. I will remove any political comments.

What are presidential approval polls?

Presidential approval polls are a simple concept to grasp: do you approve or disapprove of President X? Because newspapers and TV channels can always use them for a headline or an on air-segment, they love to commission them. During President Trump's presidency, I counted 16,500 published approval polls. 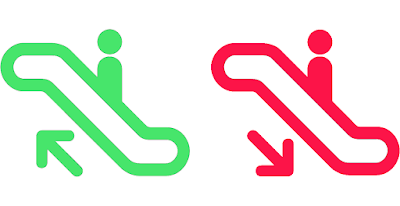 which seems fairly conclusive that the majority disapproves. But not so fast. On the same day, Rasmussen Reports/Pulse Opinion Research also ran an approval poll, this time of 1,500 people, their results were:

These were both fairly large surveys. How could they be so different?

Actually, it gets worse because these other surveys were taken on the same day too:

Let's plot out the data and see what the spread is, but as with everything with polls, this is harder than it seems.

Plotting approval and disapproval over time

Plotting out the results of approval polls seems simple, the x-axis is the day of the poll and the y-axis is the approval or disapproval percentage. But polls are typically conducted over several days and there's uncertainty in the results.

To take a typical example, Global Marketing Research Services conducted a poll over three days 2020-10-23 to 2020-10-27. It's misleading to just plot the last day of the poll; we should plot the results over all the days the poll was conducted.

The actual approval or disapproval number is subject to sampling error. If we assume random sampling (I'm going to come back to this later), we can work out the uncertainty in the results, more formally, we can work out a confidence interval. Here's how this works out in practice. YouGov did a poll over three days (2020-10-25 to 2020-10-27) and recorded 42% approval and 56% disapproval for 1,365 respondents. Using some math I won't explain here, we can write these results as: 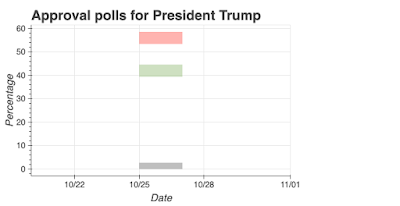 Before we get to the plot of all approval ratings, let's do one last thing. If you're plotting large amounts of data, it's helpful to set a transparency level for the points you're plotting (often called alpha). There are 16,500 polls and we'll be plotting approve, disapprove, and undecided, which is a lot of data. By setting the transparency level appropriately, the plot will have the property where the more intense the color is, the more the poll results overlap. With this addition, let's see the plot of approval, disapproval, and undecided over time. 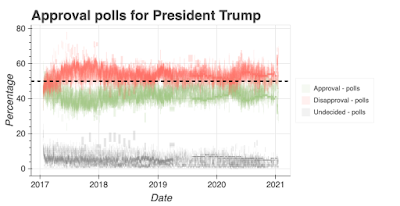 Wow. There's quite a lot going on here. It's hard to get a sense of changes over time. I've added a trend line for approval, disapproval, and undecided so you can get a better sense of the aggregate behavior of the data. 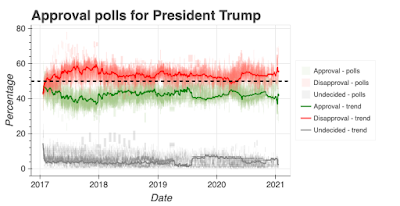 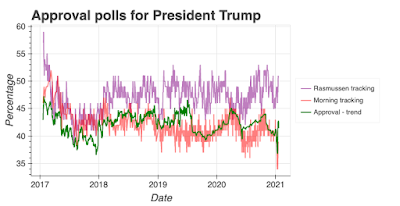 To state the obvious, the difference is huge and way above random sampling error. Who's right, Rasmussen Reports or Morning Consult? How can we tell?

To understand what this chart means, we have to know a little bit more about how these polls are conducted.

There are two types of approval polls.

Different polling organizations use different methods for population sampling. It's almost never entirely random sampling. Bear in mind, subjects can say no to being involved, and can in principle drop out any time they choose.

It's very, very easy to introduce bias by the people you select, slight differences in selection may give big differences in results. Let's say you're trying to measure President Trump's approval. Some people will approve of everything he does while others will disapprove of everything he does. There's very little point in measuring how either of these groups approves or disapproves over time. If your group includes a big measure of either of these groups, you're not going to see much variation. However, are you selecting for population representation or selecting to measure change over time?

How accurate are approval polls?

This is the big question. For polls related to voting intention, you can compare what the polls said and the election result. But there's no such moment of truth for approval polls. I might disapprove of a President, but vote for them anyway (because of party affiliations or because I hate the other candidate more), so election results are a poor indicator of success.
One measure of accuracy might be agreement among approval polls from a number of organizations, but it's possible that the other pollsters could be wrong too. There's a polling industry problem called herding which has been a big issue in UK political polls. Herding means pollsters choose methodologies similar to other pollsters to avoid being outliers, which leads to polling results from different pollsters herding together. In a couple of notorious cases in the UK, they herded together and herded wrongly. A poll's similarity to other polls does not mean it's more accurate.

What about aggregating polls? Even this isn't simple. In your aggregation:

I'm sure you could add your own factors. The bottom line is, even aggregation isn't straightforward.

What all this means

Is Rasmussen Reports more accurate than Morning Consult? I can't say. There is no external source of truth for measuring who's more correct.

It's not just these two pollsters. The Pew Research Center claims their data, showing a decline in President's Trump approval rating at the end of his presidency, is real. This may well be correct, but what external sources can we use to say for sure?

What can I conclude for President Trump's approval rating?

Here's my takeaway story after all this.

The remarkable story is how steady his approval ratings were. For most presidents, there are ups and downs throughout their presidency, but not so much for President Trump. It seems that people made their minds up very quickly and didn't change their opinions much.

Despite the large number of approval polls, the headline for most of the last four years should have been: "President Trump's approval rating: very little change".

What about President Biden?

At a guess, the polls will start positive and decline. I'm not going to get excited about any one poll. I want to see averages, and I want to see a sustained trend over time. Only then do I think the polls might tell us something worth listening to.

Posted by Mike Woodward at 7:44 AM