Why some projects are harder than others 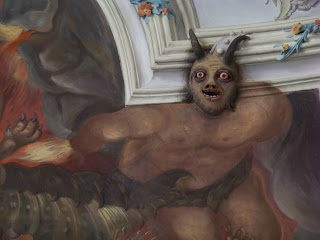 (Wicked problems can be real devils to work on - they can damage your career if not handled correctly.  Elcom.stadler, CC BY-SA 4.0, via Wikimedia Commons)

The term 'wicked problem' comes from the planning and policy world [Rittel and Webber] and refers to problems that are difficult or impossible to fix inside the current social, political, and economic system. A good example is solving poverty; there are many, many stakeholders, each with fiercely different views, and no clear measure of success (how is poverty measured, is the goal reduction or eliminations, etc.). Poverty is also linked to other factors too, like level of education, health, housing, etc. If you were a politician, do you think you could solve poverty? 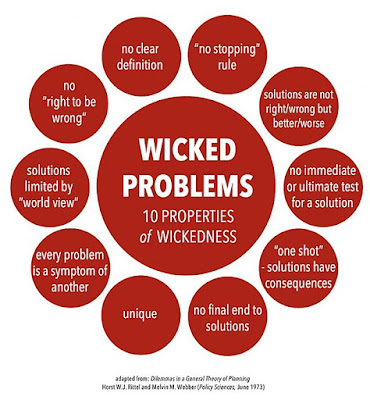 In the five decades since Rittel and Weber first discussed wicked problems, researchers have identified some of their key characteristics:

Rittel and Weber's seminal paper points out a key feature of these types of problems: they're not amenable to traditional project management using a phased approach (usually something like "gather data", "synthesize data", "create plan", "execute on plan", etc.).  This is crucial to understanding why projects solving wicked problems go wrong.

Readers who know agile software development methods are probably jumping up right now and saying 'that's why agile was developed!' and they're partly right. Agile is a huge improvement on the waterfall approach, but it's not a complete solution. Even with agile, wicked problems can be extremely hard to solve. I've had the experience of working on a project where we found a new critical requirement right towards the end, and no amount of agile would have changed that.

Data science has its own wicked problems, which I'll put into two buckets.

The other bucket is operational. Although some data science problems are well-defined, many are not. In several projects, I've had the experience of finding out something new and fundamental late in the project. To understand the problem, you have to solve it. For example, you may be tasked with reducing the RMSE for a model below some threshold, but as your model becomes more sophisticated, you might find irreducible randomness or as your understanding of the problem increases by solving it, you may find there are key missing features.

Here are some signposts for wicked problems in data science:

What's to be done?

Outline the risks and manage them

It's always good practice to have requirements specifications and similar documents. These project documents should lay out project risks and steps to counter them. For example, facial recognition projects might include sections on bias or ethics and the steps necessary to counter them. Managing these risks takes effort, which includes effort spent on looking for risks and estimating their impact.

All of the stakeholders (technical and non-technical) should know the risks before the project begins and should know the consequences of finding something late in the project. Everyone needs to understand this is a wicked project with all the attendant risks.

Stakeholders need to know about new issues and project progress. They must understand the project risks.

If a lot of this sounds like good project management, that's because it is. Data science projects are often riskier than other projects and require more robust project management. A good understanding of the dynamics of wicked problems is a great start.

Posted by Mike Woodward at 3:14 PM