How to be creative like David Bowie, R.E.M. and Coldplay

Technical people are creative too

It's obvious that songwriters are creative, but technologists have to be creative problem solvers too. Many business technical problems are poorly defined at best and require a great deal of imagination just to get started.

(It's not just artists who have to be creative. Michelangelo, Public domain, via Wikimedia Commons.)

One of the big stumbling blocks for truly solving technology problems is local optimization. Imagine you're trying to reduce the processing time for a machine learning algorithm. You can focus on optimizing calculations, but would you be better off using a different algorithm altogether? Graphically, it looks something like this. 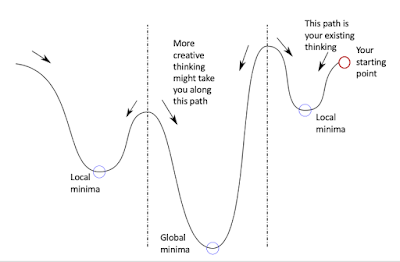 You end up focusing a great deal of effort for little gain when a more original approach might yield dividends.

This begs the question, how can you be more creative, how can you find more original approaches? How do songwriters and other creatives jump-start the creative process?

There's a technique I've found very useful: Oblique Strategies, but you have to be creative about how you use it.

The painter Peter Schmidt and the musician Brian Eno first met in the late 1960s. They had a lot in common, including an interest in the creative process. Schmidt created a list of 55 quotes to overcome artistic blocks and Eno had been working on something similar, so in 1974 they combined their efforts to produce "Oblique Strategies".

Oblique Strategies was originally a set of phrases printed on cards. The idea was simple. If you're stuck in the creative process, view one of the random cards. Try to relate what's on the card to the problem at hand. Obviously, you'll have to jump through some creative hoops to do so, which is the whole point of the exercise.

Here are some example phrases from the cards: 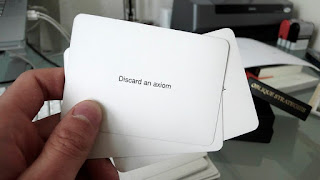 Who used it and what were the results?

In the 1970s, David Bowie moved to Berlin and, working with Brian Eno, recorded three albums, Low, “Heroes” and Lodger. You might be more familiar with some of the songs: Sound and Vision, Heroes, and Boys Keep Swinging. To keep the songwriting process going, the team used the Oblique Strategies deck to find new ways of thinking about music and lyrics. 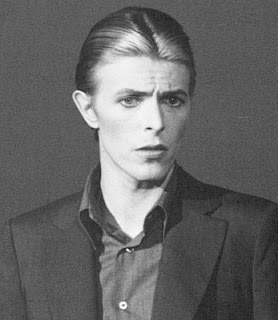 R.E.M. even went so far as quoting some of the phrases on the cards in their music, in their song "What's the frequency, Kenneth?" they quote the card "withdrawal in disgust is not the same as apathy".

Moving to more recent times, Coldplay used the cards when recording their album Viva la Vida or Death and All His Friends, but that may be because Brian Eno was their producer.

The best descriptions I've found for how musicians use the cards are blog bosts by Rosie Cass and Dave Dyment.

My use of oblique strategies

Imagine I'm trying to find missing data in a data set. I've used a statistical approach to detect missing data, but I'm stuck finding more, I know 30% of the data is missing, and I can characterize 45% of that 30%, but I don't know how to find the remaining 65%. What can I do? This is where I would turn to Oblique Strategies. The art is to use the words on the card as a starting point for your thinking.

My starting point is one of the online card generators, let's start with this one. I pull a card online:

This makes me think about what the desired end state might be. Can I identify 100% of the missing data? What 70% be enough? Maybe 45% is the best I can hope for? Do the success criteria change over time? Are there different categories of missing data? Maybe I can only get a few categories?

You can see how the train of thought continues. Let's pull another card.

This card probably isn't as helpful, so let's pull in another card.

Hmmm. This is more direct, but it's probably good advice to write down the problem clearly. So clearly that someone else could work on the problem. Maybe by clarifying the problem I could see a solution.

I could go on, but I think you can see the point. The cards don't provide a solution, but they're a kind of shock to the mind to think about the problem in different ways. It breaks me out of the rut of thinking-as-usual.

I've used the cards to solve several business-technical problems over the last few years. They've enabled me to tame some very difficult problems. Once you get the idea of how to use them, the process is straightforward - it can even turn a frustrating problem into an enjoyable thinking session.

Where to get the cards

There are several online card generators, chose the one you like best:

If you prefer the tactile feel of real cards, you can buy cards from these vendors, but the prices are high:

Creativity is a must

If you're quite early in your career, then turning to your manager and saying "I'm stuck" is acceptable and even expected behavior. But as the senior person, there might be no one else to turn to, and even worse, you have to solve the "I'm stuck, help me" requests from others. Obviously, experience is a great tutor, but even experience lets us down from time to time. We all need an occasional creativity boost and Oblique Strategies is one of the methods I use.

Posted by Mike Woodward at 4:29 PM