Why we have runs on toilet paper

To properly understand the toilet paper shortage of 2020, we have to know what really changed at the start of the pandemic and understand a little of 'irrational' consumer behavior. Press stories at the time focused on panic buying but missed key parts of the bigger picture. 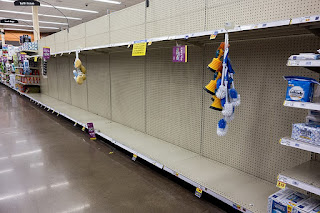 Rolling forward to 2021, the grounding of the Ever Given has led to press reports suggesting new toilet paper shortages, but the press has written very little on why there might be a shortage and what parts of the world might be affected. Here's a sneak peek of what's ahead in this post: it isn't just the stuck ship that might cause a shortfall.

Let's imagine you're a typical worker. You leave for the office or factory at 8 am, you get in for 9 am, leave at 5 pm, and get home at 6 pm. Of course, you use the restrooms at the office and you use the toilet paper there. 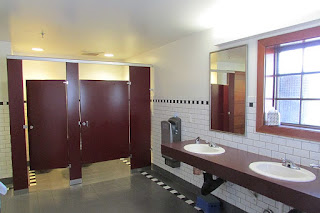 Let's imagine you go out for a meal or a drink once a week. You might use the restrooms at the restaurant or pub. Similarly, if you go to a sporting event or a concert. You get the picture.

Prior to the pandemic, you probably spent something like 55+ hours a week doing things outside the home. Post-pandemic, you spend that time at home. Right now, you're using your bathroom a lot more and other bathrooms a lot less. 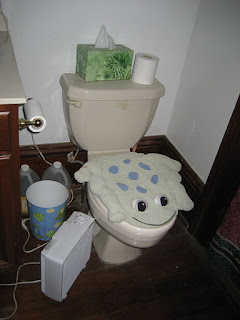 To put it simply, the overnight change in human behavior was a shock to the toilet paper supply chain. There wasn't enough of the right paper and there was too much of the wrong paper.

Because of its proven financial advantages, for decades manufacturers have used just-in-time production. This applies to toiler paper too. Under normal conditions, the demand for toilet paper stays more or less the same (what would cause a sudden increase or decrease in demand?), which makes it an ideal industry for supply-chain optimization. Why pay to store toilet paper in warehouses when you can just ship it to retailers? After all, if demand is static, by optimizing logistics you can reduce costs.

The side effect of just-in-time manufacturing is reducing the amount of slack in the system. There are no giant toilet paper warehouses to cushion demand shocks (why should there be demand shocks?). This means the system has limited resilience to large swings in demand.

(See these sites for more information:

Runs on the bank

The closest analogy to the toilet paper panic of 2020 is a run on a bank.

Banks maintain a minimum amount of cash to serve the needs of their customers. They minimize cash because it earns no interest; far better to have money invested earning interest than not. Under normal circumstances, this works just fine, it's a model built on confidence.

In a bank run, the bank's customers come to believe the bank will go bankrupt and they'll lose their money, so they withdraw money from the bank as cash (or the equivalent). This rapidly depletes the bank's cash holdings. As a run starts, more and more customers may become convinced the bank is going under, not because the bank is fundamentally insolvent, but because the run will make it so. In other words, I need to get my money out because other people removing their money means there won't be any left for me.

What starts as a relatively minor problem can rapidly expand into a full-blown rout. Even a solvent bank can go under during a run. 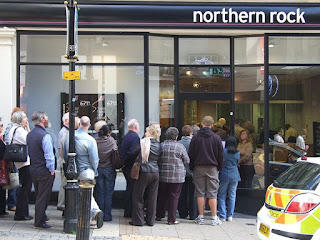 There are several ways for banks and governments to stop bank runs:

All of these actions require intervention in the free market.

(See these sites for more details:

As supplies decreased, consumers became concerned about future supplies and we had a classic run on the bank, or in this case, a run on toilet paper.

Because the toilet paper supply chain is optimized, there is no slack in the system, so the demand went immediately to the manufacturers, who couldn't ramp up production fast enough.

Panic buying was only stopped when supermarkets introduced rationing. 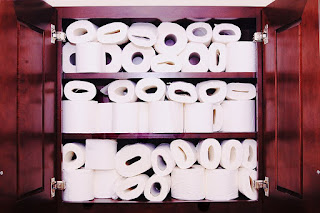 There were alternatives to rationing. The most obvious is to use the laws of supply and demand, in other words, increasing the price of toilet paper, which also happened. Interestingly, some authors suggested a form of 'nationalization' of toilet paper, which would have had the paper suppliers working together to produce unbranded toilet paper to meet demand.

As the supply chain settled down from the shock, supplies came back to normal levels.

(See these sites for more details:

Bear in mind, toilet paper is a bulky, low-cost, low-margin item. Economics dictates it's made as close as possible to where it's consumed. Here's a simplified view of the supply chain:

Sometimes, pulp production is in the same facility as the manufacture of toilet paper, but sometimes not. In some cases, pulp is shipped from country to country, for example, Suzano ships wood pulp from Brazil to paper production facilities in Europe and Asia. Of course, shipping requires ships and shipping containers.

Toilet paper consumed in the Americas is largely created in the Americas. North and Soth America have large forests and have paper processing plants, they also have extensive road and rail networks which reduce the need for transporting raw materials or the finished product by ship. Europe and Asia import wood pulp from South America and other places to manufacture paper, some of which travels via ships.

The pandemic has led to shipping container costs going through the roof. The chart below comes from Fitch Ratings who provide data on shipping prices worldwide. It's a pricing index based on the cost of renting a 40-ft shipping container for different shipping routes. It shows costs have shot up enormously for certain routes in 2021. COVID has disrupted the global supply chain, including disrupting port operations, which means containers are spending more time in ports and less time on the sea. In turn, the price of anything that comes via ship is going to go up, including toiler paper wood pulp. 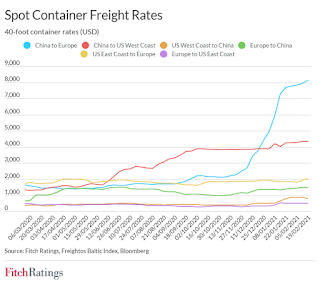 As far as I can figure out, the volume of toilet paper shipped through the Suez Canal is minimal. Of itself, the Ever Given shouldn't cause interruptions to the toilet paper supply chain. But the traffic jam is tying up shipping containers and ships and may put upward pressure on shipping prices.

If you live in the Americas, probably nothing much changes with toilet paper. If you live in Europe or Asia, there's the potential for disruption and price increases. Will there be shortages again? Only if we have another run on toilet paper - and hopefully retailers will impose rationing more quickly this time.

What does this mean?

Toilet paper production is a triumph of modern supply chain management and just-in-time manufacturing. The whole system works like clockwork and delivers significant savings for consumers. But an optimized system is more vulnerable to external shocks because it has a limited capacity to recover - there's no slack in the system. Consumer panic buying makes the situation worse and can turn a small blip in supply into a full-blown shortage - with the only mechanisms to solve the problem being rationing or other interventions in the free market.

I can't leave this discussion of toilet paper without mentioning something very weird and very British. When I grew up in the UK, schools and government buildings had a very particular kind of toilet paper. The brand name was Izal and it was stiff and coated with coal tar. The coal tar made it "medicated" and it was advertised as protecting against disease (what the diseases were was never stated). The joke was, it was John Wayne toilet paper, it was rough, tough, and took no... well, you know what I mean. 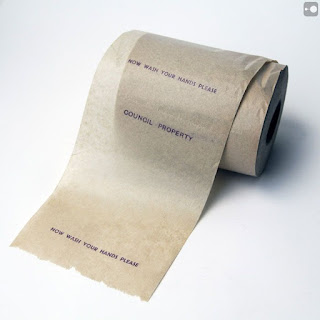 Why this ever became a thing mystifies me.

The company behind it was Newton, Chambers & Co. Originally, they gave it away to government offices and schools, possibly as an attempt to build a market. Later on, Newton sold it as a product in its own right and they were very successful. Advertising rules were laxer in the past, so they gleefully promoted its supposed health benefits. For a long time, schools and government buildings provided this type of toilet paper, and even some businesses used it. From personal experience, I can tell you using it was unpleasant.

My first job was at a retailer called Superdrug who sold toilet paper (among many other things). As the new boy, my responsibility was the toiler paper section (yes, literally starting at the bottom). I would stack the shelves with all brands of toilet paper and I used to know the price of every brand.  Astonishingly, Izal was a good seller and it was priced above most other brands. In other words, the most uncomfortable and least effective toilet paper on the market sold well and was more expensive than more pleasant and softer brands. Perhaps this should be a lesson about the complexities of the consumer retail market.

Izal (and its competitor, Bronco) are no longer around. People who liked firm toiler paper were gradually persuaded that softer was better, and I agree with them. You can still find Izal on eBay though - I guess people are selling rolls they found in the attic.

Perhaps the biggest lesson here is that even something as mundane as toilet paper can reveal a great deal about markets and the modern world.

Posted by Mike Woodward at 6:55 PM