Why is education important?

High-paying jobs tend to be knowledge-intensive. If you can't get the qualified workers you want in the UK you could move your operations to Poland, Spain, or Czechia. This obviously applies to IT jobs, but also to specialized manufacturing jobs and jobs in other areas. Governments are in a race or a beauty contest to attract employers with high-paying jobs to set up in their country. High-paying jobs support an ecosystem of other employment, from transportation workers to baristas. 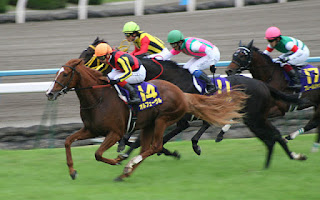 (In the modern economy, those who train well and invest will win. Image source: Wikimedia, Author:Ub-K0G76A. License: Creative Commons.)

That's why the UK's flat educational performance is so worrying and why it's puzzling there isn't more concern about it in the country. To summarize what I'm going to tell you: educational achievement in the UK has been stagnant for over a decade and later-in-life learning is flat or declining.

I'm going to focus on England because it's the largest of the UK countries, but the story is similar in Scotland, Wales, and Northern Ireland.

A slice of PISA

The OECD has run PISA (Programme for International Student Assessment) every three years since 2000. It's an assessment of 15-year-old students' achievement in science, math, and reading across several countries. The idea is you can compare performance across nations across time using the same yardstick. Currently, 79 countries take part.

Of course, not every 15-year-old in every country takes the test. In 2018 in the UK, around 13,000 students took the test - which means there was sampling. Sampling implies there will be some uncertainty in the results, so small year-to-year changes are insignificant. How statistical significance is calculated for a sample like this is well-known and I won't go into the theory here.

The press (and governments) give a lot of attention to the country league table of results, but I'm going to focus on the scores themselves.

Here are the results for math, science, and reading. Note the y-axis and the fact I've zoomed in on the scores. 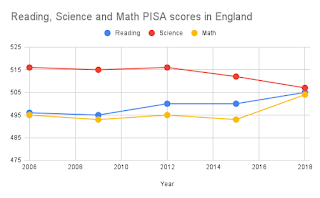 With the exception of Math in 2009 and 2012, there have been no statistically significant changes in results from the 2018 results. This is so important I'm going to say it again in another way. The performance of English 15-year-olds in math, science, and reading has not measurably changed from 2006 to 2018.

Not learning later in life

We live in a world where change is a constant. New technology is re-making old industries all the time. Whatever qualifications you have, at some point you'll need retraining. Are people in the UK learning post-formal education? 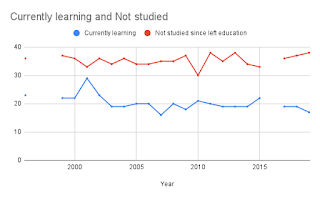 The rates of participation in lifelong learning are at best steady-state and at worst declining. The Institute breaks the data down by social class (important in the UK) and age when someone left full-time education (a proxy for their level of education). Unsurprisingly, participation rates in lifelong learning are higher for those with more education and they're lower the further down the social class scale you go.

In 2016, the OECD published a study on adult skills in England. The study was worrying. To quote from the report:

For context, people with level 2 skills or below "struggle to estimate how much petrol is left in the petrol tank from a sight of the gauge, or not be able to fully understand instructions on a bottle of aspirin".

Education at a glance

The OECD summarized a lot of data for the UK as a whole in a 2020 summary. The results are a mixed bag, some good things, and a lot of bad things. Here are a few cherry-picked quotes:

Politics and the press

Education is a long-term process. If a government invests in education for 5-year-olds, it will be 10 years or more before the effects are apparent in exam results. Most education ministers only last a few years in the job and they want some kind of results quickly. This tends to focus policy on the short-term.

In the UK, the government has tinkered with the qualification system for 16 and 18-year-olds. The net effect is to make it hard to compare results over time. For many years, average grades were going up and many commentators were convinced standards were slipping, but of course, it delivered the results politicians wanted.

The PISA results cut through all this and expose a system that's not improving. The politicians' response was to point at the country league tables and make vaguely positive comments about pupil achievements.

What about the decrease in adult education and training and the OECD report on skills? As far as I can tell, silence. I couldn't even find a decent discussion in the press.

Is there a way forward?

I don't think there are any easy answers for 15-year-olds, and certainly, none that are quick and cheap. What might help is a more mature discussion of what's going on, with some honesty and openness from politicians. Less tinkering with the exam system would be a good idea.

For adult learning, I'm very skeptical of a way forward without a significant cultural change. I can see a huge and widening educational divide in the UK. Graduates are training and retraining, while non-graduates are not. This is not good for society.

Posted by Mike Woodward at 8:00 AM