Sadly, there's a long history of scientific fraud and misrepresentation of data. Modern computing technology has provided better tools for those trying to mislead, but the fortunate flip side is, modern tools provide ways of exposing misrepresented data. It turns out, the right tools can indicate what's really going on. 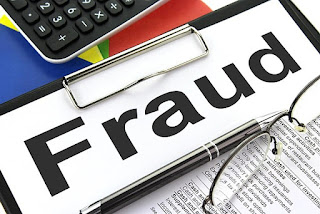 In business, companies often say they can increase sales, or reduce costs, or do so some other desirable thing. The evidence is sometimes in the form of summary statistics like means and standard deviations. Do you think you could assess the credibility of evidence based on the mean and standard deviation summary data alone?

In this blog post, I'm going to talk about how you can use one tool to investigate the credibility of mean and standard deviation evidence.

Discrete quantities are quantities that can only take discrete values. An example is a count, for example, a count of the number of sales. You can have 0, 1, 2, 3... sales, but you can't have -1 sales or 563.27 sales.

Some business quantities are measured on scales of 1 to 5 or 1 to 10, for example, net promoter scores or employee satisfaction scores. These scales are often called Likert scales.

For our example, let's imagine a company is selling a product on the internet and asks its customers how likely they are to recommend the product. The recommendation is on a scale of 0 to 10, where 0 is very unlikely to recommend and 10 is very likely to recommend. This is obviously based on the net promoter idea, but I'm simplifying things here.

Imagine the salesperson for the company tells you the results of a 500-person study are a mean of 9 and a standard deviation of 2.5. They tell you that customers love the product, but obviously, there's some variation. The standard deviation shows you that not everyone's satisfied and that the numbers are therefore credible.

But are these numbers really credible?

Stop for a second and think about it. It's quite possible that their customers love the product. A mean of 9 on a scale of 10 isn't perfection, and the standard deviation of 2.5 suggests there is some variation, which you would expect. Would you believe these numbers?

We have three numbers; a mean, a standard deviation, and a sample size. Lots of different distributions could have given rise to these numbers, how can we backtrack to the original data?

The answer is, we can't fully backtrack, but we can investigate possibilities.

In 2018, a group of academic researchers in The Netherlands and the US released software you can use to backtrack to possible distributions from mean and standard deviation data. Their goal was to provide a tool to help investigate academic fraud. They wrote up how their software works and published it online, you can read their writeup here. They called their software SPRITE (Sample Parameter Reconstruction via Iterative TEchniques) and made it open-source, even going so far as to make a version of it available online. The software will show you the possible distributions that could give rise to the summary statistics you have.

One of the online versions is here. Let's plug in the salesperson's numbers to see if they're credible.

If you go to the SPRITE site, you'll see a menu on the left-hand side. In my screenshot, I've plugged in the numbers we have:

Here are the top 9 results. 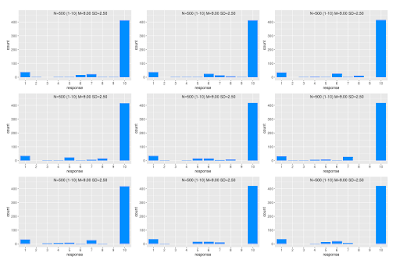 Something doesn't smell right.  I would expect the data to show some form of more even distribution about the mean. For a mean of 9, I would expect there to be a number of 10s and a number of 8s too. These estimated distributions suggest that almost everyone is deliriously happy, with just a small handful of people unhappy. Is this credible in the real world? Probably not.

I don't have outright evidence of wrongdoing, but I'm now suspicious of the data. A good next step would be to ask for the underlying data. At the very least, I should view any other data the salesperson provides with suspicion. To be fair to the salesperson, they were probably provided with the data by someone else.

What if the salesperson had given me different numbers, for example, a mean of 8.5, a standard deviation of 1.2, and 100 samples? Looking at the results from SPRITE, the possible distributions seem much more likely. Yes, misrepresentation is still possible, but on the face of it, the data is credible.

Did you spot the other problem?

There's another, more obvious problem with the data. The scale is from 0 to 10, but the results are a mean of 9 and a standard deviation of 2.5, which implies a confidence interval of 6.5 to 11.5. To state the obvious, the maximum score is 10 but the upper range of the confidence interval is 11.5. This type of mistake is very common and doesn't of itself indicate fraud. I'll blog more about this type of mistake later.

What does this mean?

Due diligence is about checking claims for veracity before spending money. If there's a lot of money involved, it behooves the person doing the due diligence to check the consistency of the numbers they've been given. Tools like SPRITE are very helpful for sniffing out areas to check in more detail. However, just because a tool like SPRITE flags something up it doesn't mean to say there's fraud; people make mistakes with statistics all the time. However, if something is flagged up, you need to get to the bottom of it.

Other ways of detecting dodgy numbers

Posted by Mike Woodward at 7:57 AM