Management and technical career tracks: separate but not equal

I’ve worked in technology companies and I’ve seen the same question arise several times: what to do with technical people who don’t want to be managers? What do you promote them to? 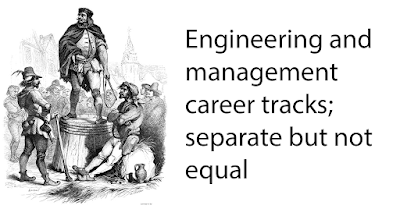 The traditional engineering career ladder emphasizes management as the desired end-goal and devalues anyone not in a management position. Not everyone wants to be a manager and not everyone is good at management. Some people are extremely technically competent and want to stay technical. What are they offered?

Separate, but not equal

Most companies deal with the problem by creating a parallel career path for engineers who don’t want to be managers. This is supposedly separate but equal, but it always ends up being very unequal in the management branch’s favor. The inequality is reflected in job titles. Director is a senior position in most companies and it comes with management responsibility. The equivalent technical role might be ‘Fellow’, which has overtones of putting someone out to grass. A popular alternative is ‘Technical Director’, but note the management equivalent is Director - the engineers get a qualifying word the managers don’t, it’s letting people know the person isn’t a real Director (they're technically a Director, but...). Until you get to VP or C-level, the engineering titles are always worse.

The management and technical tracks have power differences too. The managers get to decide pay raises and promotions and hiring and firing, the technical people don’t. Part of this is obviously why people choose management (and why some people don’t choose management), but often the technical path people aren’t even given a seat at the table. When there are business decisions to be made, the technical people are usually frozen out, even when the business decisions aren't people ones. Sometimes this is legitimate, but most of the time it’s a power thing. The message is clear: if you want the power to change things, you need to be a manager.

Here’s what I suggest. The managerial/technical divide is a real one. Not everyone wants to be a manager and there should be a career path upward for them. I suggest having the same job titles for the managerial path and the technical path. There should be no Technical Directors and Directors, just Directors. People on the technical path should be given a seat at the power table and should be equals when it comes to making business decisions. This means managers will have to give up power and it will mean a cultural shift, but if we’re to give meaningful advancement to the engineering track, this is the way it has to be.