Why A/B tests don't add up

All the executives laughed

A few years ago, I was at an industry event. The speaker was an executive talking about his A/B testing program. He joked that vendors and his team were unreliable because the overall result was less than the sum of the individual tests. Everyone laughed knowingly.

But we shouldn't have laughed.

The statistics are clear and he should have known better. By the rules of the statistical game, the benefits of an A/B program will be less than the sum of the parts and I'm going to tell you why.

An individual A/B test is a null hypothesis test with thresholds that decide the result of the test. We don't know whether there is an effect or not, we're making a decision based on probability. There are two important threshold numbers:

Standard statistical practice focuses on just a single test, but an organization's choice of \(\alpha\) and \(\beta\) affect the entire test program.

Take a second to think about these questions before moving on:

At this stage, you should have numbers in mind. I'm asking you to do this so you understand the importance of what happens next.

The logic to answer these questions is straightforward. In the picture below, I've shown how it works, but I'll talk you through it so you can understand it in more detail. 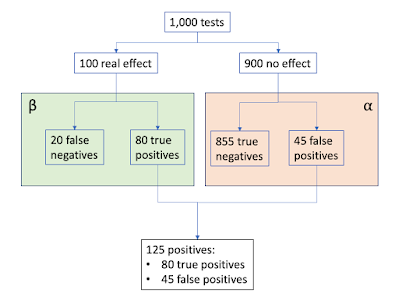 Crucially, we won't know which of the 125 positives are true and which are false.

What happens in reality

In reality, you don't know what proportion of test results are 'true'. It might be 10%, or it might be 20%, or even 5%. Of course, the reason for the test is that you don't know the result. What this means is, it's hard to do this calculation on real data, but the fact that you can't easily do the calculation doesn't mean the limits don't apply.

Can you make things better?

To get a higher proportion of true positives, you can do at least three things.

Are there are any other ways out? Maybe, but none that are simple. Everything I've spoken about so far uses a frequentist approach. Bayesian testing offers the possibility of smaller test sizes, meaning you could increase power and reduce \(\alpha\) while still maintaining workable sample sizes. Of course, A/B testing isn't the only testing method available and other methods offer higher power with lower sample sizes.

No such thing as a free lunch

Like any discipline, statistical testing comes with its own rules and logic. There are trade-offs to be made and everything comes with a price. Yes, you can get great results from A/B testing programs, and yes companies have increased conversion, etc. using them, but all of them invested in the right people and technical resources to get there and all of them know the trade-offs. There's no such thing as a free lunch in statistical testing.
Posted by Mike Woodward at 4:50 PM