Soldiers on the moon: Project Horizon

The moon and the cold war

In 1959, Cold War rivalries were intense and drove geopolitics; the protagonists had already fought several proxy wars and the nuclear arms race was well underway. The Soviet Union put the first satellite into space in 1957, which was a wake-up call to the United States; if the Soviet Union could put a satellite in orbit, they could put a missile in orbit. By extension, if the Soviet Union got to the moon first, they could build a lunar military base and dominate the moon. The Soviet Union had announced plans to celebrate its 50th anniversary (1967) with a lunar landing. The race was on with a clear deadline. 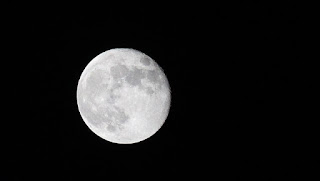 In response to the perceived threat, the US Army developed an audacious plan to set up a military base on the moon by 1965 and beat the Soviets. The plan, Project Horizon, was 'published' in 1959 but only declassified in 2014. The plan is very extensive and covers living arrangements, spacesuits, power, and transport, it was published in two volumes with illustrations (Volume I, Volume II).

In some alternative history, something like this could have happened. The ideas in it still have some relevance, so let's dive in and take a look.

In 1959, the enormous Saturn V rockets didn't exist and the army planners knew that heavy-lift rockets would take years to develop. To meet the 1965 deadline, they needed to get going with current and near-future technology, which meant Saturn I and Saturn II rockets. The plan called for 61 Saturn I rockets and 88 Saturn IIs, with a launch rate of 5.3 per month. In reality, only 19 Saturn Is were ever launched (the Apollo project used Saturn Vs, of which 13 were launched).

To state the obvious, smaller rockets carry smaller payloads. To maximize payloads to orbit, you need to think about launch sites; the closer you are to the equator the bigger boost you get from the Earth's rotation. Project Horizon considered several launch sites on the equator, none of which were in US territory. The map below comes from the report and I've indicated prospective launch sites in red. 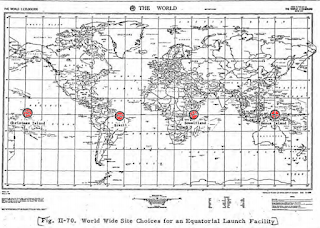 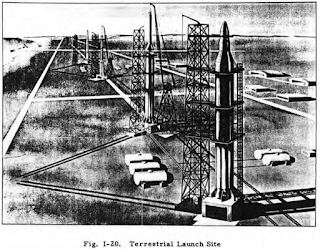 The report doesn't decide between Christmas Island and Brazil but makes a good case for both. The launch site would obviously be huge and would have several gantries for multiple launches to hit the 5.3 launches per month target.

The next question is: how do you get to the moon? Do you go directly or do you attempt equatorial orbit refueling? In 1969, Apollo 11 went directly to the moon, but it was launched by the far larger Saturn V rocket. With just Saturn I and Saturn IIs, the team needed to take a different approach. They settled on orbital refueling from a 10-person space station followed by a direct approach once more powerful rockets became available. 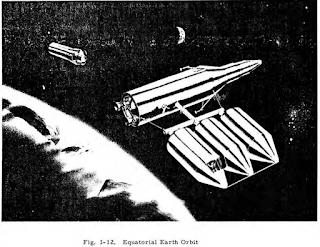 Landing on the moon

The direct and indirect methods of getting to the moon led to two different lander designs, one of which I've shown below. The obvious question is, why is it streamlined? The upper stage is the return-to-earth vehicle so it's shaped for re-entry. In the Apollo missions, the reentry vehicle was part of the command module that stayed in lunar orbit, so the lunar lander could be any shape. 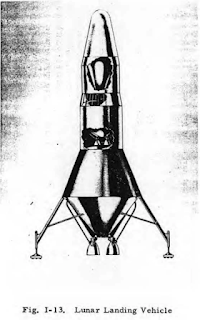 The plan was for an initial landing by two astronauts followed by construction teams to build the base. The role of the first astronauts was scouting and investigating possible base sites, and they were to stay on the moon for 30-90 days, living in their lander. The construction crews would build the base in 18 months but the maximum tour of duty for a construction crew member was 12 months. By late 1965, the base would be staffed by a team of 12 (all men, of course, this was planned in 1959 after all).

The moon crew was to have two different sorts of rides: a lunar bulldozer for construction and a rover for exploration (and 'surveillance'). The bulldozer was to dig trenches and drop the living quarter into them (the trenches would also be partially excavated by high explosives). The living quarters themselves were 10ft x 20ft cylinders. 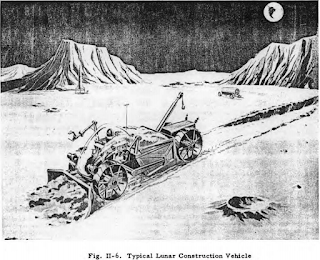 Burying living quarters helps with temperature regulation and provides protection against radiation. The cylinders themselves were to be giant double-walled thermos flasks (vacuum insulated) for thermal stability. 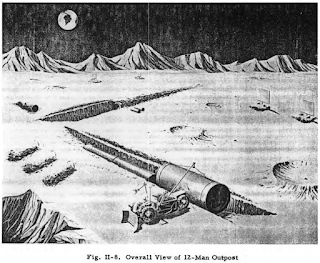 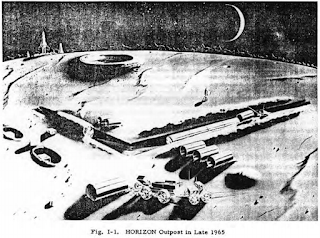 The finished base was to be l-shaped.

The initial construction camp looks spartan at best and things only improve marginally when the l-shaped base is completed. 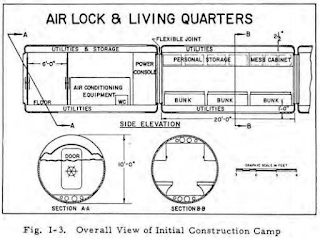 In the finished base, toilets were to be 'bucket-type' with activated charcoal for odor control; urine was to be stored on the moon surface for later recycling. 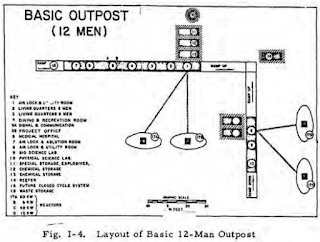 The men were to be rationed to 6lb of water (2.7 liters) and 4lb of food per day - not starvation or dehydration, but not generous either. The initial plan was for all meals to be pre-cooked, but the soldiers would later set up a hydroponics farm for fresh fruit and vegetables.

Curiously, there isn't as much as you'd expect about spacesuits, only a few pages. They knew that spacesuits would be restrictive and went so far as defining the body measurements of a standard man, including details like palm length. The idea seems straightforward, if technology restricts your design flexibility, then select your crew to fit what you can build. 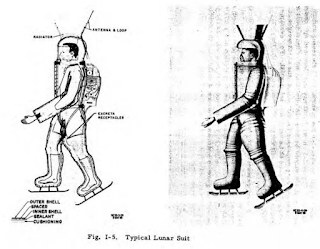 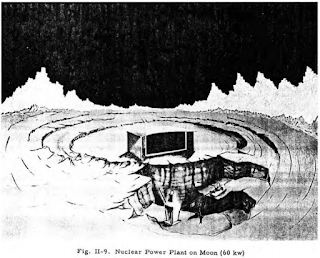 Perhaps unsurprisingly for the 1950s, power for the base was to come from two nuclear reactors. both of which needed to be a safe distance from the base and recessed into the regolith in case of accidents. It seems like the lunar bulldozer was going to be very busy.

Soldiers mean guns or at least weapons. The report is surprisingly coy about weapons; it alludes to R&D work necessary to develop lunar weapons, but that's about it.

$6 billion total in 1959 dollars. Back then, this was an awful lot of money. The real Apollo program cost $25.4 billion and it's highly likely $6 billion was a substantial underestimate, probably by an order of magnitude.

As far as I can tell, very little. The plan was put to Eisenhower, who rejected it. Instead, NASA was created and the race to the moon as we know it started. But maybe some of the Project Horizon ideas might come back.

Burying habitats in the lunar regolith is an idea the Soviets used in their lunar base plans and has been used several times in science fiction. It's a compelling idea because it insulates the base from temperature extremes and from radiation. However, we now know lunar regolith is a difficult substance to work with.

Nuclear power makes sense but has obvious problems, and transporting nuclear power systems to orbit has risks. The 1970s British TV science fiction series "Space:1999" had a nuclear reactor explosion knocking the moon out of orbit, which is far-fetched, but a nuclear problem on the moon would be severe.

The ideas of in-flight re-fueling and lunar waystations have come up again in NASA's future lunar exploration plans.

What may have dealt a project like Project Horizon a final death blow is the 1967 Outer Space Treaty which bans weapons of mass destruction and the militarization of space.

Project Horizon is a footnote in the history of space exploration but an interesting one. It gives insight into the mind of the military planners of the time and provides a glimpse into one alternative path the world might have taken.

Posted by Mike Woodward at 1:12 PM