What links fraud detection, old-fashioned log tables, and error detection in data feeds? Benford’s Law provides the link and I'll show you what it is and how you might use it.

The Benford’s Law story starts in 1881, when Simon Newcomb, an astronomer, was using some mathematical log tables. For those of you too young to know, these are tables of the logarithms of numbers, very useful in pre-calculator days. Newcomb noticed that the pages for logarithms beginning 1 were more well-thumbed than the other pages, indicating that people were looking for the logarithms of some numbers more than others. Being an academic, he published a paper on it.

In 1938, a physicist called Frank Benford looked at a number of datasets and found the same relationship between the first digits. For example, he looked at the first digit of addresses and found that 1 occurred more frequently than 2, which occurred more frequently than 3 and so on. He didn't just look at addresses, he looked at the first digit of physical constants, the surface area of rivers, and numbers in the Reader's Digest etc. Despite being the second person to discover this relationship, the law is named after him and not Newcomb.

It turns out, we can mathematically describe Benford’s Law as:

Where d is the numbers 1 to 9 and P(d) is the probability of the number occurring. If we plot it out we get: 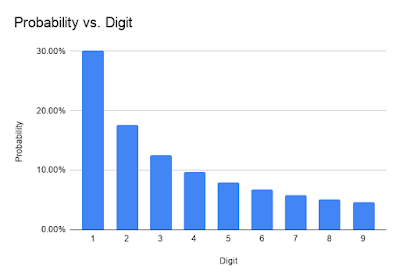 The why of Benford’s Law is much too complex for this blog post. It was only recently (1998) proved by Hill [Hill] and involves digging into the central limit theorem and some very fundamental statistical and probability concepts.

Going back to my accounting example, it would seem all we have to do is plot the distribution for our invoice data and compare it to Benford’s Law. If there’s a difference, then there’s fraud. But the reality is, things are more complex than that.

Benford’s Law doesn’t apply everywhere, there are some conditions:
Collins provides a nice overview of how it can be used to detect accounting fraud [Collins]. But Linville [Linville] has poked some practical holes in its use. He conducted an experiment using graduate students to create fake test invoices (this was a research exercise, not an attempt at fraud!) that were mixed in with simulated invoice data. He found that if the fake invoices were less than 10% or so of the total dataset, the deviations from Benford’s Law were too small to be reliably detected.

Benford’s Law actually applies to all digits, not just the first. We can plot out an expected distribution for two digits as I’ve shown below. This has also been used for fraud detection as you might expect. 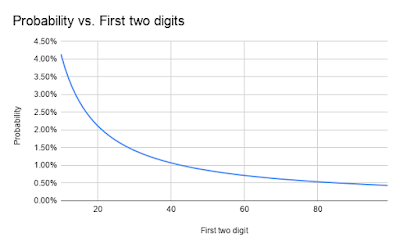 You can use Benford's Law to detect errors in incoming data. Let's say you have a datafeed of user addresses. You know the house numbers should obey Benford's Law, so you can work out the distribution the data actually has and compare it to the theoretical Benford's Law distribution. If the difference is above some threshold, you can set an alert. Bear in mind, it's not just addresses that follow the law, other properties of a data feed may too. A deviation from Benford"s Law doesn't tell you which particular items are wrong, but you do get a clue about which category, for example,  you might discover items starting with a 2 are too frequent. This is a special case of using the deviation of real data from an expected distribution as an error detection mechanism - a very useful data quality assurance method everyone should be using.


To truly understand Benford’s Law, you’ll need to dig deeply into statistics and possibly number theory, but using it is relatively straightforward. You should be aware it exists and know its limitations - especially if you’re looking for fraud.