Mouse jiggling: the good, the bad, and the ugly

Recently, I was reading Hacker News and one of the contributors mentioned a mouse jiggler. I'd never heard of one before, so I searched around. I was both horrified and fascinated by what I discovered.

A mouse jiggler is a device that randomly 'jiggles' your mouse so it appears that you're at your computer. It prevents the screen saver from kicking in and it keeps your status as active in Slack and Zoom. Here's a picture of one type of mouse jiggler. 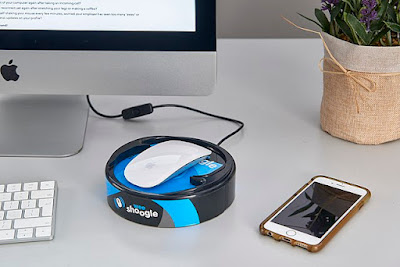 As it turns out, mouse jigglers are used by law enforcement during raids. One of the agents is tasked with getting to the suspect's computer quickly and setting up the mouse jiggler. The goal is to stop the computer from locking up; if that happens the suspect has to provide their password or a court has to order them to do so. Far better to stop the computer from locking up in the first place.

This blog post has some interesting things to say about mouse jigglers and other software/hardware used during raids.

There's a reason why security teams have computers lock themselves after a few minutes of user inactivity and the reason is security. Leaving a computer unattended and unlocked is bad, leaving a computer unattended and unlocked with a mouse jiggler over extended periods is even worse. If I were a CISO, I would ban mouse jigglers - or better still, make sure that no one feels the need to use one.

For everyone who's not law enforcement, why would you want a jiggler? The sad answer seems to be fooling employee surveillance software. Instead of trusting their employees or measuring by results, some companies have installed surveillance software that tracks mouse usage (mouse use = work). Jigglers are an attempt to circumvent these kinds of trackers.

Jigglers have been around for a while and now there's software to detect them; you too can detect if your employees are jiggling. In response, some of the newer jigglers offer random and subtle jiggles that are harder to detect. I can see a jiggling arms race coming.

The reviews for this jiggler on Amazon are enlightening; there are 2,612 of them, an astonishing number, and the product has a 5-star rating overall. Many of the reviews mention fooling IT surveillance software. If you don't like this one, there are plenty of other models to choose from, many with over 1,000 reviews.

Think about what this says. There are enough people who're concerned about surveillance to spawn a mini-industry for $30 devices. These devices add no value - it's not like a mouse or a keyboard or a camera. As one of the reviewers said, the jiggler lets them go to the bathroom without feeling like it's being noted. It's all about trust, or the lack of it.

If people are using mouse jigglers at your company, it's an indication that something has gone quite wrong.

Posted by Mike Woodward at 7:35 AM