An offer you can't refuse?

Imagine you're in a casino playing craps, a game where you bet on the outcome of two dice thrown at the same time. The probability of a double six coming up is 1/36, but no-one has thrown a double six for over 110 throws. The table is starting to get crowded and noisy with people betting on a double six. It's due to come up, and it must come up soon. 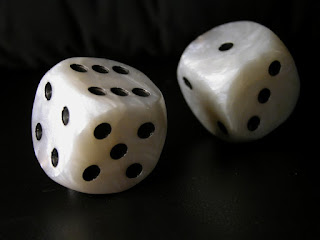 A new player rolls the dice; snake-eyes (double ones) - still no double six.

You feel a tap on your elbow. A lady in a cocktail dress whispers to you that she'll give you odds of 20 to 1 for a double six.

Another player rolls the dice; easy-four (one and three) - the expectation for a double six mounts.

Your new friend whispers that she'll reduce the odds soon; she asks if you want to take the bet.

It's now 130 throws since a double six has occurred and it should have occurred 3 or 4 times by now.

Do you take the bet?

The gambler's fallacy is the belief that the outcome of a random event is somehow influenced by the previous random events. In our craps case, some examples might be:

Let me lay this out even more starkly, in craps:

The story starts in Venice, Italy in May 2003. The Venice lottery was a game where 6 numbered balls (plus a bonus ball) were selected from a set of 90 numbered balls. The lottery was run twice a week. Each number should come out on average once every 7-8 weeks. As with all government-sponsored lotteries, the results were well-publicized.

By October, people realized the number 53 was overdue. They started to gamble on 53 occurring - it was overdue, so it must come up. But 53 just didn't come up.

News of the 53 drought started to spread, and more and more Italians started to bet that 53 would occur, but it didn't. It didn't come up in November or December either.

In January of 2004, a woman from Carrara committed suicide because she'd spent her family's life-saving gambling that 53 would come up. It didn't.

People went crazy betting money that 53 would come up, they became known as '53 addicts'. They were sure it must come up. Sadly, it didn't. A man from Signa shot his wife, his son, and himself after losing money gambling on 53.

Italians gambled and lost a huge amount of money on 53, an estimated 4 billion Euros. They had fallen for the gambler's fallacy and believed that 53 must come up soon.

The Venice lottery made a lot of money, but the Italian gamblers did not.

How the cocktail dress lady (and casinos) makes money

To understand if the cocktail dress lady was offering a good deal, we need to relate probability to odds.

The probability of a double six is 1/36.

The odds of a double six are:

Generally speaking, casinos and bookies make money in one of two ways: 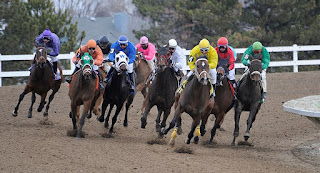 To make money, the bookie reduces the odds. Instead of offering 9 to 1 on each of the horses, the bookie offers 8 to 1. The bookie still takes in $10, but this time only pays out $9. In the real world, it's more complicated, but you get the idea.

The other way to make money is to underprice probabilities. A double six should be offered at 35 to 1, but you could offer it at 20 to 1. This is a horrible deal, but if gamblers have a bad case of the gambler's fallacy, they may be convinced the probability is much higher than 1/36 and they may even view a horrible deal as the deal of a lifetime. The casino, or the lady in the cocktail dress, make money by knowing the odds and knowing when to offer a deal that seems attractive, but isn't.

Not only should you not accept the 20 to 1 offer, you should offer it to other players.

Obviously, there are naive gamblers in Las Vegas, but do people really fall for the gamblers' fallacy at the roulette table? After all, you have to have some level of sophistication to understand and play the game, so surely gamblers are savvy and know how to price bets appropriately? It seems that they don't always.

Using videotape data supplied by a casino in Reno, Nevada, two researchers tracked the pattern of gambling on roulette. If gamblers have fallen for the gambler's fallacy, you might expect to see certain patterns of betting, for example, if red hasn't come up as often as expected, they might bet more on red. The researchers found small, but significant examples of the gambler's fallacy The reality is then, there are people who fall for the fallacy, even those playing a sophisticated game like roulette. 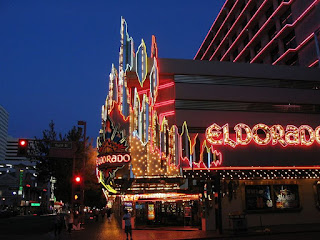 Another object lesson in the gambler's fallacy occurred at a roulette table in a casino, this time at a casino in Monte Carlo. In 1943, the ball landed on red 32 times in a row. The people who thought black must come up were cleaned out.

The gambler's fallacy has been an active area of research for some time. Variations of it have been found in different places:

Let's imagine you're an asylum judge. You're aware of the average 'success' rate for applicants and you don't want to be too far from the average. Let's assume the cases are randomly assigned (deserving and undeserving). By random chance, you might get a long string of deserving or undeserving cases, maybe as many as twenty in a row. The gambler's fallacy may kick in after a series of similar cases, for example, the first ten cases were deserving, so the eleventh 'must' be undeserving, as a result, you judge more harshly based on expectation.

The gambler's fallacy in business

If you listen closely enough, you hear business people make the gambler's fallacy all the time. How often have you heard these kinds of phrases:

Despite what people say, business can be strongly driven by belief and not rationality. If everyone needs a deal to be landed, then the collective view might become that a deal will be landed, regardless of what a realistic measure of the probabilities are.

How to guard against the gamblers' fallacy

There's something about humanity and our (mis)understanding of statistics that makes us vulnerable to the gambler's fallacy. The best teacher might be experience. How many Italians who bet on 53 would do so again? There's some evidence that the gambler's fallacy is particularly strong when the data evolves over time, which ties in with the Italian lottery and casino examples. Perhaps the best defense is to take a step back and view the data as a whole, then make a decision away from the influence of others.

The existence of opulent casinos should be a lesson that those who understand probability can make money from those who do not.

Posted by Mike Woodward at 7:39 AM