London is an oddity

I was born and grew up in London but it was only after I left that I started to realize how much of an oddity it is; it's almost as if it's a different country from the rest of the UK. I thought other capital cities would have a similar disjointed relationship with their host countries, and I was partly right, but I was also mostly wrong. Let me explain why London is such an international oddity.

Zipf's law refers to the statistical distribution of observations found in some types of data, for example, word frequency in human languages. It isn't a law in the sense of a scientific 'law', it's a distribution.

In simple terms, for measurements that follow Zipf's law, the first item is twice the second item, three times the third, and so on. For example, in English, the word 'the' is the most frequent word and it occurs twice as often as the next most common word ('of') [https://www.cs.cmu.edu/~cburch/words/top.html].

It turns out that a number of real-world measurements follow Zipf's law, including city sizes.

The US and elsewhere

Here's what city size looks like in the US. This is a plot of ln(Rank) vs ln(Population) with the biggest city (New York) being bottom right (ln meaning natural logarithm). 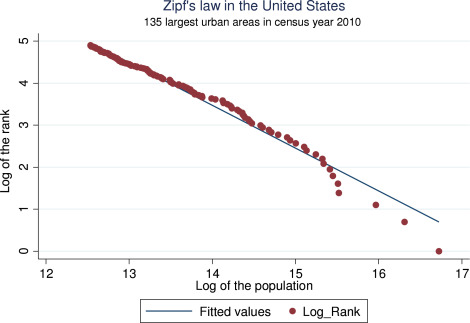 It's close to an ideal Zipf law distribution.

One of the interesting features of the Zipf city distribution is that it's mostly persistent over time [http://www.casa.ucl.ac.uk/mike-michigan-april1/mike's%20stuff/attach/Gabaix.pdf]. Although the relative size of a few cities may change, for most of the cities in a country, the relationship remains the same. Think about what this means for a minute; if the largest city has a population of 1,000,000 and the second largest has a population of 500,000, then if the population increases by 150,000 we would expect the largest city to increase to 1,100,000 and the second to increase to 550,000; most of the increase goes to the bigger city [https://www.janeeckhout.com/wp-content/uploads/06.pdf]. The population increase is not evenly spread.

A notable aside is how the press manages to miss the point when census data is released. If the population increases, most of the increase will go to the bigger cities. The story ought to be that bigger cities are getting bigger (and what that means). Instead, the press usually focuses on smaller cities that are growing or shrinking more than the average growth rate.

The UK and the London weighting

There's a big exception to the Zipf law relationship. London is much bigger than you would expect it to be. Here's the Zipf's law relationship for UK cities with London in red. 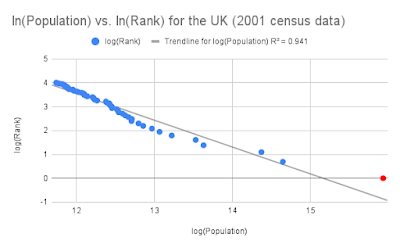 London is twice the size you would expect it to be.

There are many theories about why London is so big. Some authors flip the question around and ask why Britain's second cities aren't larger, but that doesn't help explain why [http://spatial-economics.blogspot.com/2012/10/are-britains-second-tier-cities-too.html]. Here are some theories I've seen:

I think there's an element of truth in all of them. Certainly, UK governments (of all parties) have often prioritized spending on London, for example, there are no large-scale public construction projects anything like the Elizabeth Line elsewhere in the UK. Culture and the arts are also concentrated in London too, think of any large cultural organization in the UK (British Museum, National Theatre Company, Victoria & Albert...) and guess where they'll be located - and they're all government-funded. Of course, cause and effect are deeply intertwined here,  London gets more spending because it's big and important, therefore it stays big and important.

What are the implications?

London's size difference from other UK cities drives qualitative and quantitative differences. It's not the only UK city with a subway network but it's by far the largest (more than twice as big as the next networks).  It has more airports serving it than any other UK city. Its system of governance is different. Its politics are different. The fraction of people born overseas is different. And so on. Without change, these differences will continue and London will continue to look and feel very different from the rest of the UK, the country will be two countries in one.

As a child, I was right to pick up on the feeling that London was different; it's really does feel like a different country. It's only as an adult that I've understood why. I've also realized that the UKs second tier cities are falling behind, and that's a real problem. The UK is over centralized and that's harming everyone who doesn't live in London.

London is considered a first tier or world city [https://mori-m-foundation.or.jp/english/ius2/gpci2/index.shtml] and the challenge for UK governments is to bring the UK's other cities up while not dragging London down.